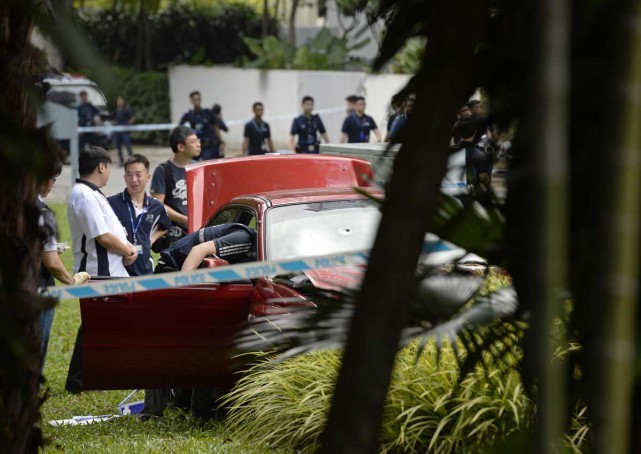 The Vehicle Counter Assault Teams, made up of pairs of armed Gurkha officers, had a straightforward mission - use all lawful means to prevent any vehicle from crashing through barriers and leaving the vehicle check stations set up outside Shangri-La Hotel.

On May 31 last year, two officers saw that a car had driven off without being checked by police and was accelerating towards the final line of concrete barriers.

Moving towards the car, the Gurkha officers raised their weapons while shouting repeatedly for the driver to stop, State Counsel and Second Solicitor-General Kwek Mean Luck told the court yesterday.

But it kept on accelerating, and crashed through the barriers, before turning towards the Shangri-La Hotel and surrounding residential apartments.

One of the Gurkha officers fired a shot in the driver's direction. The car kept on moving. The second officer then fired two shots. With no indication that the car was stopping, the second officer fired two more shots. At this point, the car slowed to a crawling speed.

The Gurkhas are elite soldiers from Nepal employed in the British Army, Indian Army and Singapore Police Force. Singapore's Gurkha Contingent was formed in 1949. The unit saw action in the ensuing decades against militant unions and in racial riots, where their image as a neutral force became an asset. About 2,000 of them are serving in the Singapore Police Force.

•A red Subaru saloon approaches a vehicle check station set up along Ardmore Park, but heeds neither an auxiliary police officer's (APO) signal to slow down nor a "Slow Down Police Check Ahead" sign.

•A second APO stationed between the first and second layer of concrete barriers to control and direct traffic towards the station notices the car approaching him fast. He waves his traffic wand to signal the car to slow down. The vehicle stops in front of the APO and he directs it to proceed to the station.

•The car moves past a third layer of concrete barriers at the start of the vehicle check station and stops in front of two policemen. The officers approach the car on the left.

•The rear passenger appears agitated and asks why the car is being checked. Before the officers can reply, the man shouts for the driver to go. The driver ignores repeated instructions to stop and crashes through the final line of concrete barriers at the end of the vehicle check station.

•A police inspector sounds the air horn and shouts "Dash Through" several times to warn other officers, who fall prone on the ground.

•Two Gurkha officers standing guard in front of Shangri-La Hotel open fire after their repeated verbal warnings of "Police, stop!" go unheeded. A single bullet from the first Gurkha officer's weapon enters the car's front windscreen, but it continues moving. A fourth shot from the second officer's weapon hits the driver on the side of his head near the upper right ear. The car slows to a crawl.

•Two other Gurkha officers don helmets and vests and check on the car, while the pair who opened fire return to their posts.

This article was first published on Jan 27, 2016.
Get a copy of The Straits Times or go to straitstimes.com for more stories.