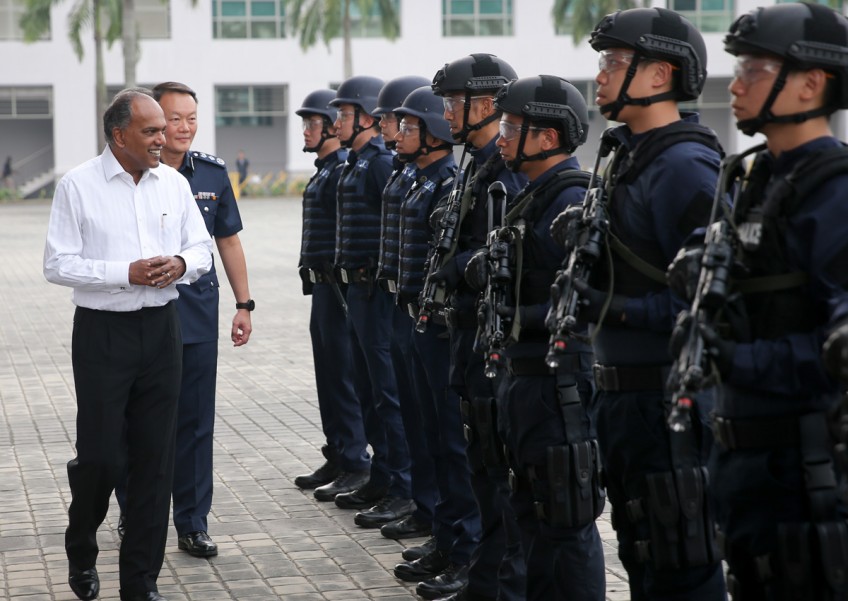 Home Affairs and Law Minister K. Shanmugam said yesterday that the discovery of a terror cell here is a strong signal that Singapore cannot let its guard down.

Singapore could well have been one of the group's targets, he noted.

His comments come a day after the Ministry of Home Affairs (MHA) announced that eight Bangladeshi workers were detained under the Internal Security Act (ISA) late last month for plotting terror attacks back in their country.

The men had called their group Islamic State in Bangladesh (ISB), and had a list of targets and bomb-making manuals, and raised funds to buy firearms. Mr Shanmugam said: "You and I don't go in search of these things and collect money, identify people you are going to target, so there is concern."

Speaking to reporters yesterday before a closed-door forum on religious extremism at Temasek Polytechnic, he noted that the latest arrests, along with recent attacks in Paris and Jakarta, showed the terror threat is serious and that it is here to stay.

There are at least two more ISB members in Bangladesh. Mr Shanmugam said the fate of those men depended on the Bangladeshi authorities, adding that the Government was cooperating with them.

Yesterday, MHA also revealed that the eight men, who are aged between 26 and 34, were arrested between late March and early April, and given two-year detention orders in late April.

All had worked here for between three and 10 years, and when they first came to work, were not known to be radicalised or involved in terrorism-related activities.

The group's leader, Rahman Mizanur, 31, worked as a draftsman in a local construction firm, and had worked on and off in Singapore since 2007. He returned here last December, and there was no information to suggest that he had radicalised views.

MHA also named the five other Bangladeshi nationals picked up in the case. They were not involved in ISB, but owned or spread jihadi-related materials, or promoted armed violence. All five have been deported, and arrested in Dhaka. They are: Evan Galib Hassan Chowdhury, Rana Masud, Pailot Md Rana Miea, Islam Tanjemul and Alomgir Md.

MHA said the ISB members had met largely in open parks or fields.

They are still under investigation, and are not known to have acted on plans to buy firearms yet, it added.

"Several of them are liable to be prosecuted for terrorism financing. Investigations are still ongoing and we are not able to comment further on this matter," the ministry said.

The ISB is the first group comprising all foreigners to be detained under the ISA for terrorism-related activities in Singapore.

There are 23 people currently detained under the ISA for terror activities. The other 15 are Singaporeans.

MHA stressed that there was "no indication" that these ISB members were also part of the group of 27 Bangladeshi men arrested last year, all of whom have been deported.

Efforts to reach out to foreign workers have also been stepped up.

Asking Dr Chee to clarify his position, Mr Shanmugam said Singaporeans would be affected if foreign workers were barred.

"These are serious matters, security issues. They require careful consideration, proper thought and I think, really, we should all just avoid taking cheap shots and political opportunism," he said.