She knocks out husband's teeth 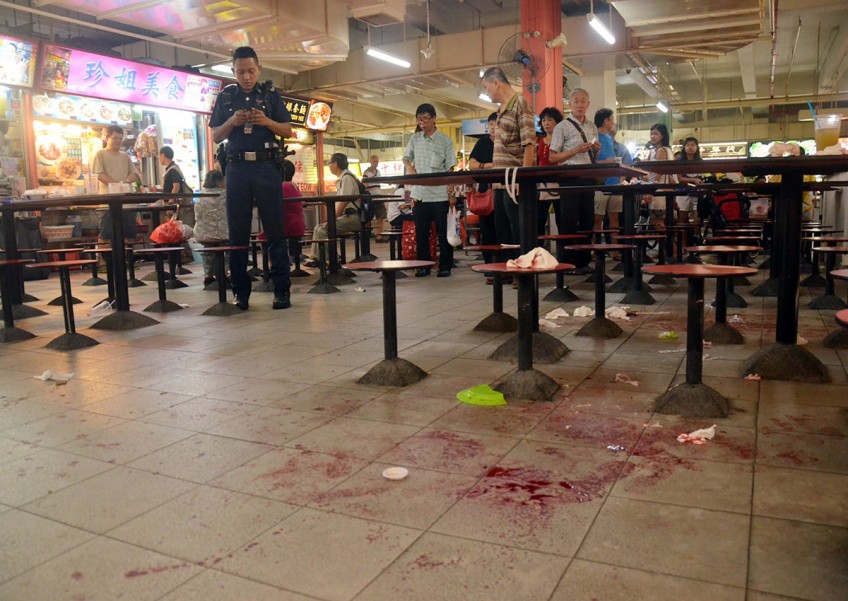 AFTERMATH: Blood stains on the floor of the food centre after the fight. HURT: The husband was taken to the Singapore General Hospital with injuries to his face and head.
Shin Min Daily

They were an odd couple.

She was built like a truck and he was a scrawny fellow.

Every hawker at the Chinatown Complex Market and Food Centre that The New Paper on Sunday spoke to says she was about twice his size.

So when they fought over a radio at lunchtime yesterday, the 62-year-old man ended up with injuries to his face and head, and lost two of his teeth.

The scuffle between the husband and wife happened at the food centre at Smith Street where the man works as a cleaner.

Hawkers say he has a habit of listening to the radio while clearing dishes from the tables.

The fight allegedly started when the 57-year-old woman snatched her husband's radio and shouted for him to leave with her.

Witnesses said the man threw some bowls at her before shoving her in anger, reported Shin Min Daily News.

The woman then allegedly retaliated by pushing him to the ground, stomping on him and hitting him over the head with a bottle she had grabbed from one of the tables.

The fight was broken up by about six bystanders, said the hawkers.

When TNPS went to the food centre last evening, it was business as usual. The blood stains on the floor had been cleaned.

"There was so much blood everywhere at lunchtime," said a female hawker who sells rojak and declined to be named.

A police spokesman said police received a call about the fight at around noon. The call for assistance to the Singapore Civil Defence Force came 15 minutes later. The couple was taken to the Singapore General Hospital.

Several hawkers told TNPS that they see the woman at the food centre every day, seated near where her husband works "to keep an eye on him".

"She would sometimes sing aloud but the two often quarrelled," said a hawker selling braised duck.

He added that this was not the first time the woman had got into a fight.

"About a month back, she had some disagreement with another cleaner, and the way she was kicking and stamping on him after he fell to the ground, we thought he was a goner. Police came that time too," he added.

Police said this was a case of voluntarily causing hurt and are investigating.

This article was first published on Sept 20, 2015.
Get The New Paper for more stories.