She's my wife not a prostitute 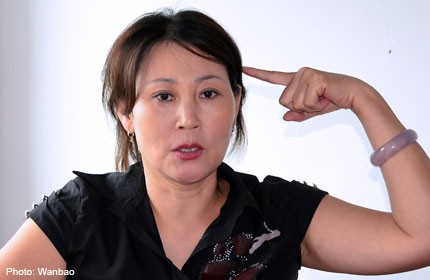 SINGAPORE - I'm not a prostitute.

That was what she told the tattooed man who approached her at Lorong 23 in Geylang last Saturday.

He had mistaken her for a prostitute and wanted her off "his territory".

"He ran towards me aggressively and looked like he wanted to hit me," said Madam Liu Ya Hui, 50, a Chinese national.

Madam Liu had stepped out of a taxi to go to a UOB bank there at around 4pm.

Her Singaporean husband, Mr Tay Chong Teck, 43, had remained in the taxi.

As she exited the taxi, she received a phone call from a friend. She stood on the pavement as she answered it.

Suddenly, the man, who had a previous encounter with her last month, went up to her, shouting expletives and accusing her of being a prostitute.

"He was obviously a pimp or a gang member," said Madam Liu, who lives in Serangoon.

She said that he looked like he was in his 40s and was covered in tattoos.

You cannot stand here, this is my territory and you better respect me, the man told her.

"He wanted me gone, but I didn't move because I was very angry. I told him to stop insulting me. Then he kicked me on the leg," said Madam Liu in Mandarin.

Her husband immediately got out of the taxi to defend her.

"I told him she is not a prostitute, she is my wife. I wanted him to stop hitting her," said Mr Tay, a technician who runs an air-conditioning repair company.

He picked up a chair from a nearby eatery to defend his wife, but that apparently enraged the man even more.

"He went behind the bank and came back with a long, wooden rod and started to beat my husband," said Madam Liu, who helps out in her husband's company. The rod was more than a metre long, she said.

According to Chinese newspaper Lianhe Wanbao, the man hit Mr Tay until the rod broke.

Madam Liu told the evening daily: "It went on for a minute until the rod broke and someone shouted 'the police are here'. Only then did the man run away."

She said he even turned around and threatened: "I'll hit you again the next time I see you."

Other bystanders called the police during the attack and one even tried to pull Madam Liu away to safety. But she did not budge.

"I was scared, but more than anything, I was angry. I took out my mobile phone to take pictures of the man, but one uncle kept telling me to run," she told The New Paper.

The police said they received a call at 4.38pm, requesting assistance.

Mr Tay had a fracture on his left arm and Madam Liu suffered a bruised leg. They were taken to Tan Tock Seng Hospital for treatment.

It was also not the first time that Madam Liu had been confronted by the man. According to her, the man also approached her outside the same bank last month while she was trying to collect a payment. She was with two of her husband's clients then.

The man told her angrily that she was not to solicit in that area, but her husband's clients and other bystanders interceded and told him she was not a prostitute.

Madam Liu admitted she might have provoked him when she said: "I can stand wherever I want."

According to her, the man left and came back with two others. He then pointed a finger at her and challenged her to a fight.

"I told him that he was already a loser for ganging up against a woman," she said.

At that moment, Mr Tay called her.

The tense situation was defused when her husband told her to leave without provoking the men further.

"The man must have remembered me from then even though I avoided the Geylang area after that," she said.

"The only reason I visited that particular bank was because I had to meet my clients there. Otherwise I wouldn't even bother going."

The police are investigating and did not confirm if anyone had been arrested.