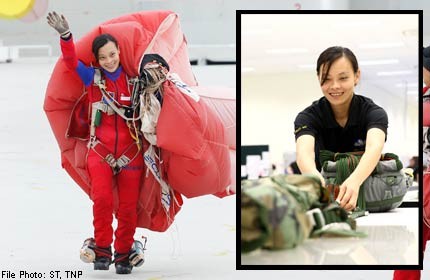 SINGAPORE - For the first time in history, a female Red Lion will dive from the skies over Singapore on National Day.

The Red Lions - the nickname coined in 1996 for the Singapore Armed Forces Parachute Team - are a perennial favourite each year at the parade, which will be held this year at The Float@Marina Bay.

Most of the Red Lions are commandos, but Third Warrant Officer (3WO) Shirley Ng, 35, is a rigger, in charge of packing the parachutes that the commandos use. Each 15kg parachute takes about half an hour to pack.

She said that her five fellow NDP jumpers do not see her any differently. She said: "They call me brother as well!"

As part of her job, she parachutes about once a week and has clocked 280 jumps.

Although her rigging job may sound boring or repetitive, she finds her job fulfilling due to the heavy responsibility placed on her. She said: "As a rigger, the safety of the jumpers is in my hands, so I have to put in my all to make sure that the chutes are packed safely."

Come National Day, she will be packing her own parachute. She will jump 10,000 feet from a Super Puma helicopter onto the floating platform, to cheers of about 27,000 spectators.

While one would expect that the highlight of jumping at Marina Bay would be the extraordinarily scenic view, 3WO Ng said that she is too focused on the job to appreciate the view.

She said: "At 10,000 feet, we have to form a star formation before lining up in a row for the camera to film us. So all I'm thinking of is how to do all this and of the landing ahead."

She free falls for about a minute until reaching about 4,000 feet, which is when she deploys her parachute. From then on, it is about 45 seconds before she makes her grand entrance.

Recounting her jumps at recent rehearsals, she said: "I could hear the crowds cheering for me, and the first thing I did when I landed was to wave at the crowd."

The O-level holder joined the army as a rigger when she was 20 years old.

Knowing that she would have an opportunity to do the month-long free fall course as a rigger, she jumped at the opportunity.

She finally had the opportunity to do the course in 2006 and has trained both in Singapore and overseas, in the United States. She has also taken part in a skydiving competition in Dubai.

When 3WO Ng, who is single, first told her father that she would be jumping at the parade, she said that he just smiled and gave her a thumbs-up.

While her childhood dream of "flying" has come true, she said that she is looking forward to making even more jumps, be it at future NDPs or in skydiving contests.

She said: "Although I have achieved my dream, I can't stop here."

Red Lions team leader, 2WO Chong Boon Heng, 37, said: "We are very proud to have her on the team."