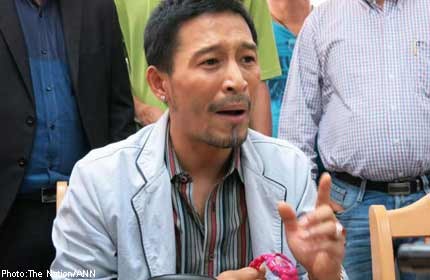 However, Chakkrit, while admitting he shot a gun inside a house, said he never thought of killing or harming his wife and child - as accused.

Police earlier convinced Chakkrit to surrender at a friend's house in Pattanakarn Soi 13 and took him to Min Buri police station.

Min Buri superintendent Col Saravuth Jindakham said that, after interviewing injured people and witnesses, police got an arrest warrant yesterday for a charge of attempted murder, assault, plus having a gun and ammunition in possession without permission and domestic violence.

After police informed him of the charges, he was due to be taken for a drug test at the Police General Hospital.

Meanwhile, police objected to him being given bail on grounds that he may seek to intimidate witnesses. Police will apply today for court permission for his first period of detention.

Boonkid and Nithawadi told a press conference that Chakkrit had hurt them. They were accompanied by Social Development and Human Security Minister Pavena Hongsakul, who said she would take the women and family members to apply today for a Justice Ministry witness protection programme.