Singapore asked to hand over ponzi masterminds wanted in Thailand 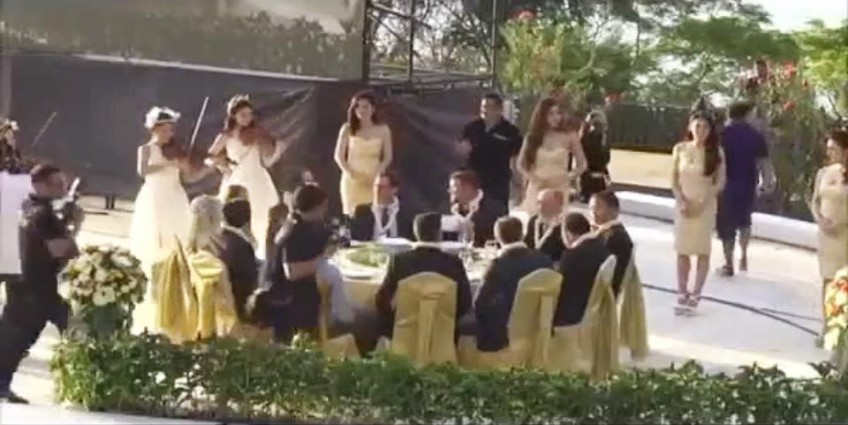 The gang lured investors with fake CNN interview, ceo flown in on helicopter and superlong limos. Photo (above) taken during Eagle Gates' grand opening in Thailand two years ago.
The Nation/Asia News Network

Thailand is seeking the extradition of four Singapore citizens believed to be involved in the Eagle Gates Group’s ponzi scheme, which has resulted in a combined loss of Bt235 million (S$9.8 million) for about 250 Thai and foreign investors.

Pol Colonel Songsak Raksaksakul, deputy chief of the Department of Special Investigation (DSI), said investors were lured into putting their money in assets that did not exist.

Thai authorities are seeking cooperation from Singapore authorities to extradite the four unnamed alleged masterminds of the scam to Thailand for further legal action.

At its peak, as much as Bt1 billion had been invested in the scam, Songsak said, adding that the DSI yesterday obtained Criminal Court approval to extend the detention period of US national Derrick Mathew Keller. He was taken in as an alleged accomplice.

Songsak said Keller had admitted that he was an actor and had been hired by the mastermind to act as “CEO” of Eagle Gate to deceive investors in China, Hong Kong, Macau, Malaysia and Thailand.

The DSI deputy chief added that the gang had allegedly bought the name of a company that was registered in the US but did no business, and used it to cheat investors. The gang also created a fake website and a fake video clip depicting Keller being interviewed by CNN about the trading firm’s prospects. Keller claims he was given a script to follow.

In 2016, the gang held a grand launching ceremony at the Royal Cliff Beach Hotel in Pattaya, during which Keller was flown in on a helicopter. The function, held by the hotel’s pool, also included performances by well-known singers.

The DSI official said the fake firm paid these yields in bitcoins, but investors could not withdraw money unless they could sell the cryptocurrency. The investors later filed police complaints after realising they had been defrauded.

Pol Lt-Colonel Phaisit Sangkhahapong, director of the Foreign Affairs and International Crime Division, said this was a transnational criminal gang with accomplices in several countries, adding that there were 23 accomplices in Thailand. So far, 12 Thais and a foreigner have been arrested in connection with the scam.

Phaisit added that Singapore had issued arrest warrants for masterminds and accomplices, while Thailand is seeking their extradition.

The gang posted its Hollywood-style fake CNN interview on YouTube in 2016.

“This is CNN,” the interview starts against a background of Capitol Hill in Washington DC, with the interviewer describing herself only as Alexandra of the stock market room, while the interviewee is called Eddy McClough, chief executive of Eagle Gates.

The interview lasts about seven minutes, in which McClough talks about the negative interest-rate trend. This video clip, used to convince potential investors during seminars and conferences, helped boost the fake firm’s credibility, police explained.

The gang held seminars and meetings in key cities, including Nakhon Ratchasima and Chiang Mai, and the masterminds appeared to have the whole presentation perfectly planned, with executives arriving by helicopter or super-long limousines, police said.

At the seminar, the executives would be greeted by a long line of well-dressed men and women, usually foreigners, while attendees were presented with a beautifully designed prospectus and video clips so they could be convinced to invest, police added.