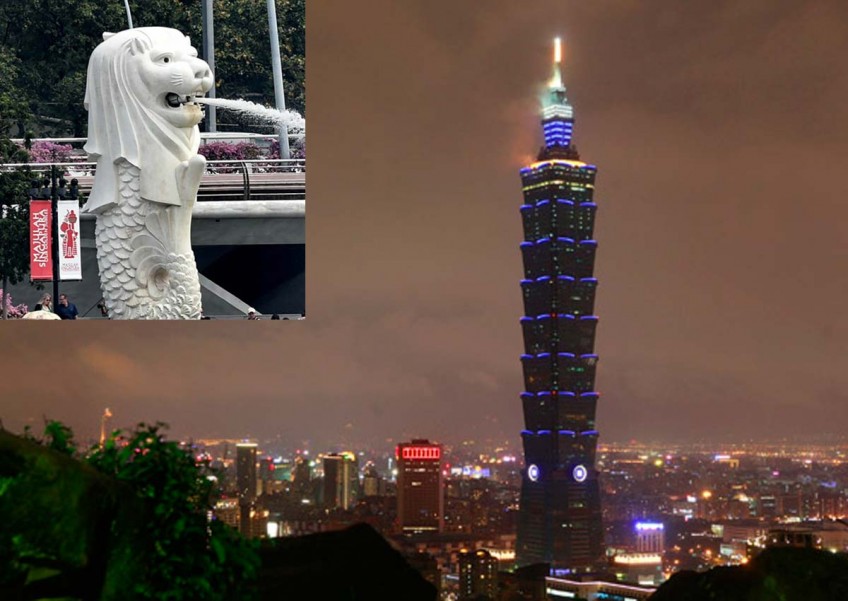 Taipei city, the capital of Taiwan, seen during Earth Hour in 2011. Inset: The Merlion statue of Singapore.
Reuters, AFP

Don't blush, Singapore. Taiwanese love you to bits and love you most.

This is a fact, and not some fantasy.

In a survey covering more than 1,000 Taiwanese by Taiwan Public Opinion Foundation, Singapore emerged as their favourite country with nearly nine in 10 (87 per cent) giving a ringing endorsement, reported Taiwan News.

This year's survey result saw Singapore toppling Japan (83.9 per cent), which has always reigned on top of the list.

Lee Peng-wen, a speech communication professor of Shih Hsin University, said respondents' positive impression of Singapore is due mainly to the similarity of culture and language, reported Taiwan News. Singapore's image as clean, efficient, modern and safe country also contributed significantly to the result, she said.

Canada was the third favourite among the 12 countries and European Union that the respondents were asked to rate while North Korea was the most disliked (81.6 per cent).

The vote was split over traditional rival China, with 47 per cent naming it their least popular country while more than 44 per cent declaring it their favourite country, reported The Japan Times.