Singapore to begin giving Covid-19 vaccines to children under 5

A girl receives the Pfizer-BioNTech coronavirus disease (Covid-19) vaccine in Lansdale, Pennsylvania, US, on Dec 5, 2021.

Singapore will soon roll out Covid-19 vaccinations for children below five and plans to introduce bivalent jabs targeting both the wildtype virus and its circulating variants, Health Minister Ong Ye Kung said on Tuesday (Sept 13).

But the government has no plans to include the Covid-19 jab as part of the country’s National Childhood Immunisation Schedule, which includes vaccinations for diseases such as tuberculosis and hepatitis B, Ong told lawmakers in parliament.

Of the 12 vaccinations listed in the schedule, shots for measles and diphtheria are mandatory.

Hong Kong last week effectively extended its vaccine mandate to include young children , with those in the five to 11 age bracket set to be banned from restaurants and other business establishments if they do not have at least one jab by September 30.

On infant vaccinations, Ong said the republic currently had supplies of the two-dose Moderna shot approved for use on those aged six months to five years old.

Nonetheless, given Singapore’s “relatively low” caseload, the roll-out would be timed for end-October or early November.

It would begin concurrently with the booster programme offered to children aged five to 11.

“As we open up vaccinations to all these children … we want to continue to disclose as much information and medical information as we can,” Ong said.

So far, there was no evidence suggesting that Covid-19 jabs resulted in potential risks of developmental defects in children.

Ong was providing an update on the Covid-19 situation in parliament on Tuesday, where he described current conditions as “stable” and noted that the incidence rate of hospitalisation had fallen in the most recent Omicron wave compared to previous ones.

There are currently 243 people hospitalised for Covid-19 as of Monday noon.

The city state boasts a high vaccination rate, with 93 per cent of its 5.45 million population having taken two jabs and 80 per cent of residents receiving a booster shot. Over 95 per cent of elderly aged above 60 have received two primary jabs.

With a high inoculation rate and most residents having caught the virus – over 70 per cent – Singapore significantly reopened its borders in recent months and lifted most pandemic-related restrictions.

Residents now have to mask up only on public transport and in some healthcare settings after the indoor mask-wearing mandate was recently relaxed.

Read Also
Covid-19 vaccines for children aged 5 to 11 should be available from January: Kenneth Mak 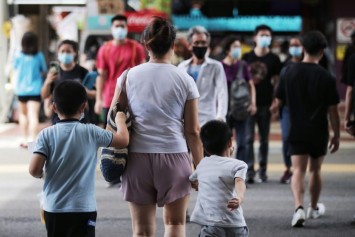 Ong stressed that keeping citizens’ vaccinations up to date was a key prong of the country’s strategy.

Already, Singapore is looking to bring in bivalent vaccines from Pfizer-BioNTech and Moderna, which target both the original Covid-19 strain and the currently circulating ones, including the Omicron BA.4 and BA.5 variants.

The US Food and Drug Administration last month approved bivalent vaccines for use as a single-booster dose while the European Medicines Agency – the EU regulator – recommended the new booster vaccine on Monday. The European Commission is expected to give the final go-ahead shortly.

“Our intention is to update our vaccines … as formulations improve,” said Ong, adding that a decision on the arrangement for bivalent vaccines would be announced soon.

Still, he urged citizens to receive their second booster shots if they were eligible, “and not wait for various specific vaccines because Covid-19 is still spreading in our community”.

“Existing vaccines remain highly protective against severe diseases including for the BA.5 [strain],” he said. “We must remember that as we increasingly treat Covid-19 as endemic, it doesn’t mean that it’s not there.”