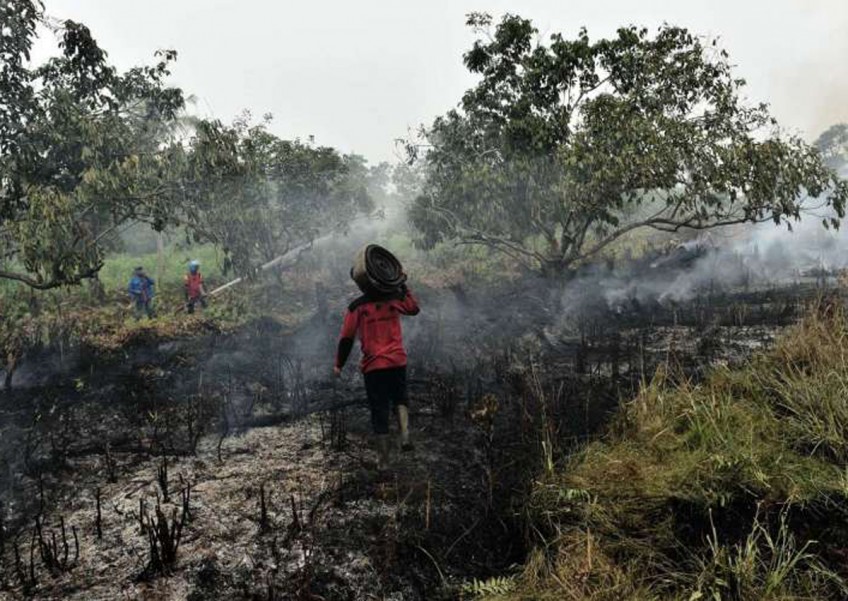 Fire fighters and volunteers extinguish a fire on peat land in Kuala Kapuas, Central Kalimantan, on Oct 25, 2015.
The Straits Times

Singapore remains committed to working with Indonesia in resolving the haze crisis, although its firefighting assistance team that was sent to South Sumatra has returned home, the Ministry of Foreign Affairs (MFA) said yesterday.

The MFA was responding to queries from The Straits Times on whether there will be another deployment of firefighting assets to Indonesia after the team returned from its two-week mission last Saturday.

A ministry spokesman said that although the direct involvement of Singapore has ended, the Government will continue to enhance co-operation to tackle the root causes of the fires that led to the haze.

"To this end, Singapore will continue to take legal action against errant companies responsible for the haze through the Transboundary Haze Pollution Act (THPA)," she said. "We look forward to Indonesia's response to our repeated requests to share information on these companies (as) this information will be critical in helping Singapore to take the fullest course of legal action against these companies under the THPA."

Indonesia has not named a majority of the firms it is investigating in connection with the illegal fires, even though it has agreed to share the information with Singapore.

Coordinating Minister for Political, Legal and Security Affairs Luhut Pandjaitan said last Monday that this is because the cases against the companies have not been taken to court yet.

The thick smoke from the raging fires has spread across many parts of South-east Asia, affecting Indonesia's ASEAN neighbours Singapore, Malaysia, Brunei, the Philippines and Thailand. Singapore has called on the 10-member grouping to "take firm and decisive action" through enhanced regional co-operation to help prevent the recurrence of the transboundary haze.

The authorities are preparing for a possible mass evacuation in areas of worst-hit Sumatra and Kalimantan, and navy vessels are on standby. But air pollution levels yesterday fell from hellish conditions the previous day, when the Pollutant Standards Index (PSI) in some parts of the two regions shot into four-digit PSI readings.

Satellite images last Saturday showed the haze from fires burning in Sumatra creeping towards Java Island, potentially engulfing Jakarta. It was, however, a premature forecast: The haze never arrived in the city where the central government resides.

In Singapore, the National Environment Agency said hazy conditions are likely to continue today, with air quality expected to be in the mid to high sections of the unhealthy range

This article was first published on Oct 26, 2015.
Get a copy of The Straits Times or go to straitstimes.com for more stories.