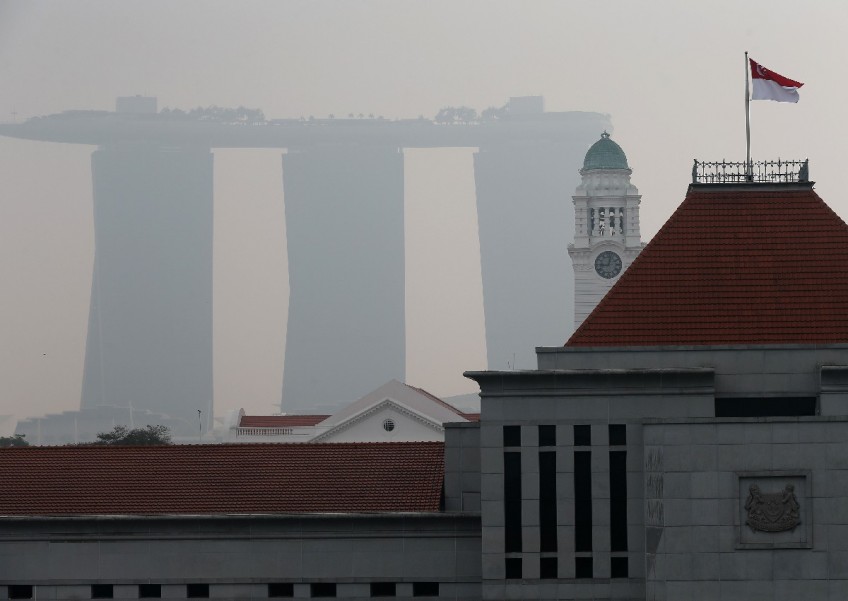 The haze in Singapore on Saturday (Oct 24).
The Straits Times

SINGAPORE - Singapore's direct involvement in the fire-fighting efforts in Indonesia may have ended, but the government will continue to tackle the root causes of the fires that cause haze, the Ministry of Foreign Affairs (MFA) said in a statement Sunday.

Two key points were highlighted by MFA: Enforcement against errant companies contributing to the haze, and bilateral and regional environmental co-operation to prevent the recurrence of forest fires.

"Singapore will continue to take legal action against errant companies responsible for the haze through the Transboundary Haze Pollution Act (THPA)," MFA said.

"We look forward to Indonesia's response to our repeated requests to share information on these companies, following its agreement to do so on 27 September 2015. This information will be critical in helping Singapore to take the fullest course of legal action against these companies under the THPA."

MFA also added that Singapore is looking to resume bilateral co-operation with Indonesia's Jambi province to deal with land and forest fires in the southern Sumatran province.

The 2007 Indonesia-Singapore collaboration in Jambi Province lapsed in 2011 and has yet to be renewed by the Indonesian government.

"Singapore hopes to expand such co-operation to other regions and provinces in Indonesia," said MFA.

MFA also called on the Association of Southeast Asian Nations (ASEAN) to take firm and decisive action to prevent the recurrence of the transboundary problem through regional co-operation, such as the operationalisation of the ASEAN Haze Monitoring System.

Singapore has been offering haze assistance packages to Indonesia since 2005, and most recently, a team of 40 Singapore Armed Forces (SAF) and Singapore Civil Defence Force (SCDF) officers was deployed to Palembang in Sumatra to aid with firefighting efforts.

The team concluded their two-week deployment on Saturday (Oct 24), putting out more than 50 hot spots in Sumatra in the process.

The haze has killed at least 10 in Indonesia and caused respiratory illnesses in half a million, Jakarta authorities said on Sunday, while winds have carried the smoke into Singapore, Malaysia, Thailand and the Philippines this year.