Singapore election: 6 twists in the campaign as the People's Action Party and opposition battle for votes

At midnight, all 192 candidates must suspend campaign activities to comply with a day-long “cooling off” period before voters make their choice on Friday.

Going into the contest, some observers had predicted the hustings would be sedate, given the ban on mass rallies and restrictions on other physical political events because of the coronavirus pandemic.

But the campaigning has been far from that, as the long-ruling People’s Action Party (PAP) and its key opponents among the 10 opposition parties locked horns – at times in acrimonious fashion – online and through the media.

With campaigning taking place largely on social media, it has been a 24/7 battle for hearts and minds.

Parties found themselves under pressure to react to attacks instantaneously, and also had to contend with supporters from opposing sides wielding derisory memes and edited video clips of the smallest of gaffes by candidates on the campaign trail.

The PAP, the only ruling party independent Singapore has known, campaigned on a platform emphasising that it alone had the wherewithal to shepherd the country out of the public health and economic crises the pandemic has caused – its leaders hammering home the campaign slogan “Our Jobs, Our Lives, Our Future”.

The opposition presented varied manifestos, but there were common threads in their pitches – the ruling party’s response to the current crisis was not as stellar as it made it out to be, and more elected alternative voices in the legislature would act as a counterbalance to the powerful PAP.

While these messages featured prominently in local media accounts of the campaign, there were also several unexpected twists.

Here are the key moments of the campaign, as we saw it:

He ain't heavy, he's my brother

Voters and political observers alike had long expected Prime Minister Lee Hsien Loong ’s estranged brother Lee Hsien Yang to play a role in opposition politics in this election, having voiced support for parties other than the PAP after the siblings’ public feud erupted in 2017.

The 62-year-old former corporate titan did eventually enter the fray – joining the Progress Singapore Party (PSP) as a campaigner, not a candidate.

One of the key moments of suspense ahead of the polls was the question of whether he would stand for election, having formally joined the PSP days before Nomination Day.

But as candidates filed into nomination centres to submit their papers on June 30, Lee stayed out – though he had earlier joined a group of PSP candidates before they entered one of the centres.

When the process ended at half past noon, he released a statement saying he believed “political leadership in Singapore needs to be much more than one family or one man”. 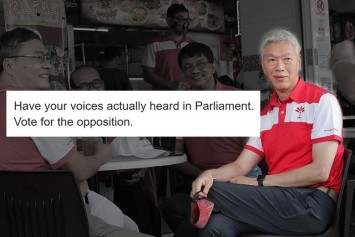 He said he chose “not to stand for political office because I believe Singapore does not need another Lee ”.

Prime Minister Lee, asked about his brother’s involvement in politics, sought to impress on voters that he was unperturbed – but could not resist throwing some shade.

“With social media, you can have five, six million voices on the internet. The public will assess which ones are worth listening to, which ones make sense,” he said.

After creating a buzz on Nomination Day, Lee Hsien Yang has been campaigning on the ground for the PSP.

On Facebook, where he is followed by over 58,000 people, the former army general has also published posts backing the Workers’ Party. The two parties together are contesting nearly 50 per cent of parliament’s 93 seats.

In the five-seat ward, Heng and his team members will face off with a team from the Workers’ Party that includes advertising executive Nicole Seah, an icon of sorts among younger Singaporeans following her 2011 entry into politics as a 24-year-old.

Heng’s decision has been one of the hot topics of the election campaign, with various questions swirling over the move.

Why did Heng – the presumptive successor to Prime Minister Lee – make the switch?

How will he fare against Seah, a millennial and Gen Z darling? What does it mean for his prime ministerial chances if his victory margin is lower than expected?

Heng, 59, was also one of the early victims of the vast army of meme makers during the campaign after he briefly fumbled with his words on Nomination Day.

“For our East Coast residents, we also have a plan for the East Coast. We have a East Coast, Singapore, we have it together an East Coast plan. We care at East Coast,” he said at one point in his 90-second speech.

The finance tsar’s remarks were otherwise coherent, as he outlined the government’s plans to steer the economy out of the current downturn.

The tourism authorities of neighbouring Malaysia and Thailand used the gaffe to promote their respective east coasts.

Chicken restaurant Nando’s used the moment to promote its delivery services in the hot seat where Heng is contesting.

While the memes have immortalised the brief blunder, Heng has so far not referenced the episode.

Singapore is no stranger to political debates in the election season, with such events held in the lead up to the 2011 vote and during the campaign period for the 2015 election. 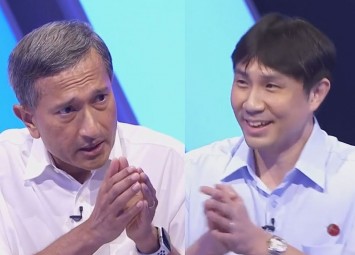 While Balakrishnan, a top debater in his school days, impressed as expected with a steady swatting away of attacks flung at the PAP’s policies, the breakout star of the event was Workers’ Party candidate Lim, a 44-year-old economist.

Online, commenters said he represented the kind of top calibre candidate the PAP had long criticised the opposition for lacking. His closing lines in the debate went viral.

“The truth is the PAP, in all likelihood, would have this mandate [to govern] by the end of this election,” Lim said, drawing chuckles from fellow participants.

“What we are trying to deny them is a blank cheque, and that is what I think this election is about.”

For many opposition supporters, that was this election’s “mic drop” moment.

One of the fiercest political skirmishes of the campaign also arose from that Wednesday night debate.

Met with repeated claims by the SDP’s Chee that the PAP had plans to increase the population from 5.7 million to 10 million, a visibly agitated Vivian volleyed back against the opposition politician for peddling falsehoods and taking a “cheap shot”.

Chee stressed that his claim was based on what Heng had said in a university forum in 2019, as reported by The Straits Times.

The report did not cite Heng as saying the government wanted to raise the population to 10 million as Chee claimed.

Instead, it said the deputy prime minister mentioned Liu Thai Ker, a former master urban planner who had at one point said the city state could fit 10 million people.

The SDP’s supporters argued that the The Straits Times article made it seem like Heng was endorsing Liu’s idea. The PAP’s return volley following the debate was forceful.

In a statement, it said Chee – a long-time arch critic of the ruling party – had conjured a bogeyman “out of thin air to befuddle, frighten and divide Singaporeans”.

Chee’s SDP in the aftermath of the debate claimed “victory”, saying he managed to get an assurance that the population would not be artificially raised to 10 million, but the PAP said this was yet another drama the veteran politician had “staged many times before”.

In a second statement, it upped the ante, using an analogy of domestic abuse.

“You deny it, and show proof that you neither said this nor have beaten your spouse. Instead of apologising, Dr Chee says: ‘Victory! I extracted a promise from you that you will never beat your spouse’.”

That attack garnered a sharp reaction from the women’s rights group AWARE, which said the ruling party was insensitive to domestic violence victims.

On Sunday, an already tense campaign took a fresh turn over past remarks on social media about race and religion made by Raeesah Khan, a 26-year-old candidate standing on the opposition Workers’ Party ticket, with police investigating after a report was filed.

The activist is being fielded in the four-seat GRC of Sengkang, which is seen as one of the precincts where the PAP may face a stiff challenge. 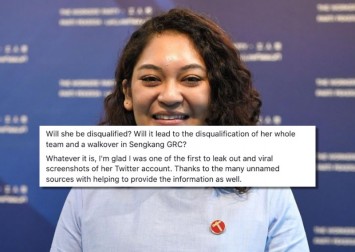 The Workers’ Party late on Sunday said it stood by Khan after she apologised for the posts – from 2018 and May this year – she described as “insensitive”, but the PAP on Monday challenged the opposition party to state its stance on her remarks.

Workers’ Party chief Pritam Singh said the group would refrain from commenting on the matter while police investigations are pending.

The police earlier said Khan was being investigated under Section 298A of the penal code – governing acts or speech that incite enmity between ethnic groups – for two previous social media posts.

Online, some people questioned the underlying thinking behind her posts. Did she really believe that minorities were not treated equally under the law, some asked.

Supporters, meanwhile, wasted no time in showing they fully backed the cat-loving politician. The hashtags #IstandwithRaeesah and #CatsforRaeesahKhan have been trending online for days.

PM Lee staying a while longer?

No one expects dramatic changes come Saturday, the morning after election night.

The PAP is certain to form the next government, and President Halimah Yacob will go through the formality of inviting its chief, Prime Minister Lee, to do so. But what happens afterwards?

In a key campaign speech on Monday, the 68-year-old leader – contesting his ninth general election and possibly his last as prime minister, signalled he will hand over power only after the Covid-19 crisis abates .

The deeply analysed remarks were made in a virtual event meant to emulate the so-called Fullerton Rally, held in the central business district during past elections by the ruling party to directly address white-collar workers.

Lee said he was “determined to hand over Singapore, intact and in good working order, to the next team”.

“At this critical moment, Singapore needs a capable government, with the full support of a united people, more than ever,” he said.

He assured voters that along with himself, his top two lieutenants Tharman Shanmugaratnam and Teo Chee Hean, both senior ministers, would “see [the current crisis] through”.

“What I did not expect – what no one expected – was to meet this overwhelming crisis in the last stretch of my premiership,” Lee said.

Political analysts told This Week in Asia the remarks may have been an early sign that a planned handover to Heng – expected to take place before the prime minister turns 70 – could be slightly delayed, depending on the trajectory of the current crisis.

Lee in his speech did mention the so-called fourth-generation PAP ministers led by Heng, saying they would play a key role in seeing the crisis through along with Tharman and Teo.

In an interview with The Straits Times published on Tuesday, he stressed that the PAP was “building our team for the long term”.

“I have depth in my team, new members, younger ones, people who are being exposed, groomed, prepared to take over from the older ones in order to provide Singapore good leadership beyond the working life of me and my older colleagues,” he said.