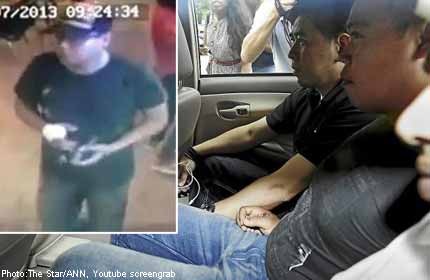 PETALING JAYA - A Singaporean policeman, who turned fugitive after he allegedly killed a businessman and his son, has been arrested in Johor Baru.

After the alleged crimes on Wednesday, senior staff sergeant Iskandar Rahmat escaped to Johor Baru by scooter through the Woodlands checkpoint at 11.17pm.

He was spotted at a restaurant at Danga Bay at around 11.30pm on Friday before his arrest by the Johor Baru police.

"We have handed the man over to Singapore Police," CID director Comm Datuk Hadi Ho Abdullah told The Star yesterday.

The gruesome murders grabbed attention in the Singapore media as the suspect was an experienced policeman and a manhunt ensued for 54 hours until he was arrested in Johor Baru on Friday.

A newspaper on the island reported that Iskandar, who had been a policeman for 14 years, was suspended at the time of the murders as he was facing internal disciplinary action.

He was said to be in debt and had domestic problems.

Iskandar is the main suspect in the killings of businessman Tan Boon Sin, 67, and his son Chee Heong, 42, also a businessman.

In November 2012, Boon Sin had gone to the Bedok police station to report that he had been a victim of theft.

Iskandar was the investigating officer at the time, but was subsequently reassigned from the case.

Police revealed that Boon Sin was the first to be killed in his Hillside Drive home on Wednesday afternoon.

He was slashed after returning home from Certis Cisco Centre in Paya Lebar where he had withdrawn some items from a safe deposit box there.

Chee Heong was seen staggering out of the house and collapsing in a pool of blood at about 3.40pm. He had also been slashed in the neck.

In a bid to escape, it was believed that Iskandar had driven Boon Sin's Toyota Camry and even reversed it into Chee Heong's body.

The car then dragged the body before it was dislodged outside Kovan MRT station, 1km away.

Iskandar abandoned the car before escaping to Malaysia on the scooter.