SINGAPORE - The Workers' Party (WP) has scaled back its outreach activities to residents amid the coronavirus disease outbreak, and will adjust the way it campaigns for the coming general election in the interest of public health, said party chief Pritam Singh on Monday (March 16).

So far, the opposition party has suspended the sale of its Hammer newsletter, which party members sell every Sunday during walkabouts, mostly in constituencies where it plans to contest.

Mr Singh said such outreach is an important activity for WP members to make contact with voters. 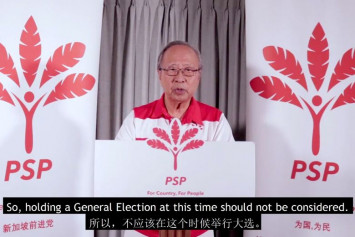 However, he added: "I think that we would rather err on the side of caution at the moment."

"But let's wait until we have more announcements from the Elections Department as to how the campaign will be conducted."

Since the release of the report on electoral boundaries last Friday, speculation has been rife that an election will soon be called, and some opposition parties have pressed the Government to guarantee that it will not hold a general election during the Covid-19 pandemic.

The WP has not joined in the chorus, and instead called on the Government to "take caution and exercise judiciousness in calling for a GE".

Speaking to reporters on the sidelines of his meet-the-people session in Bedok Reservoir Road, Mr Singh said the WP will continue with house visits, but has limited the number of people at such visits and also during other activities.

He added: "There's only that much you can do. You still have to canvass for support, you still have to ask residents how they're doing. There is some risk, but I think we take our own precautions as well."

With Prime Minister Lee Hsien Loong having said that all necessary precautions will be taken for parties to campaign effectively if elections have to be held before the pandemic is over, there has been talk of rallies possibly moving online or being limited.

Asked about this, Mr Singh said: "Certainly those are some of the considerations that not just political parties but I'm sure all Singaporeans are thinking about. I think I'll be in a better position to comment on that when there's some clarity from the Elections Department as to how an election under the circumstances of Covid-19 will be will be carried out."

He said: "I think it's quite uncanny that SMCs which the WP contest in are sort of removed."

He added that it was "quite curious" that Fengshan, which was carved out of East Coast GRC only at the last election, is now gone.

But, he added: "We are price takers not price setters... It is what it is. Let's move forward."