Singapore-Hong Kong travel bubble: All you need to know about vaccinations, tests and contact tracing

It's finally happening. What are the details?

Quarantine-free travel between Singapore and Hong Kong will begin on Wednesday, May 26 for travellers irrespective of nationality who have remained in either city for 14 consecutive days before their date of departure. The 14 days will exclude any compulsory quarantine period.

The bubble starts with one flight a day from each city carrying up to 200 travellers per flight. From June 10, this will be increased to two flights a day from the two cities with up to 200 passengers on each flight.

The number of flights will be allocated equally between Singapore Airlines and Cathay Pacific. Flight numbers for the designated travel bubble flights will be SQ882 and CX734 for the Singapore-Hong Kong route and SQ883 and CX759 for the Hong Kong-Singapore route.

Flight prices shot up after the announcement. A one-way Singapore Airlines flight to Hong Kong in early May before the bubble is priced at HK$1,675 (S$286.10), but a return ticket departing on May 26 costs upwards of HK$4,544 as of 1.30pm on Monday. Meanwhile a one-way bubble flight on Cathay Pacific costs HK$4,133.

Do only vaccinated people qualify?

Hong Kong residents would need to be fully vaccinated - receiving two doses of either the Sinovac or BioNTech vaccines on offer - 14 days before their date of departure to Singapore. The vaccine requirement does not apply to Singapore travellers heading to Hong Kong.

Singapore's Transport Minister Ong Ye Kung said this was because the original plan last year was for people to be eligible for quarantine-free travel with a partner city or region that was "safe, where the control measures are good, and then you can travel … with tests but no need for vaccination".

Hong Kong met this criteria, Ong said, adding that the city's requirement for all departing residents to be fully vaccinated was probably because "they wanted an extra incentive for people to get vaccinated".

Hong Kong's commerce minister Edward Yau Tang-wah explained that the travel bubble plan rested on keeping coronavirus infections under control and on the testing capabilities of both sides. The requirement that those travelling from Hong Kong be vaccinated was an added enticement to boost the city's inoculation drive, he said.

However, the Hong Kong government will allow exceptions to this rule, with no proof of vaccination required for Hong Kong residents who:

2. Are not able to be vaccinated on medical grounds

3. Have been in Hong Kong for less than 90 days before departure

4. Are using a non-Hong Kong travel document for departure

To date, about 11 per cent of Hong Kong's population of about 7.5 million has received at least a first vaccine dose. Roughly 432,000 people, or 5.7 per cent of the population, are fully vaccinated. The city currently allows anyone above 16 to get vaccinated.

Singapore is using the Pfizer-BioNTech and Moderna vaccines. So far, it has given 2.2 million shots and 849,764 people, or 14.9 per cent of the population, have been vaccinated. In Singapore, vaccinations are open to those aged 45 and over.

So what are the rules?

Travellers will need to test negative for Covid-19 four times - two tests should be taken within 72 hours before their scheduled departure time and two tests will be taken upon arrival in their destination and home city.

All travellers will have to bear the full cost of any medical treatment in the respective cities, while Singapore requires all short-term visitors from Hong Kong to purchase travel insurance. 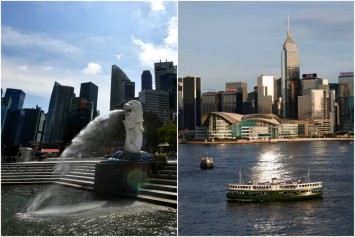 Visitors to both cities will be required to download the respective contact tracing apps - TraceTogether and LeaveHomeSafe before their departure from their home city.

Travellers must comply with existing public health and safe distancing measures in either city, such as mask wearing and restrictions on group gatherings.

Travellers leaving Singapore can refer to this site for testing details. Each test will cost about S$200 (HK$1,170). Those going to Hong Kong must book and pay for their on-arrival test at Hong Kong International Airport ahead of time and will remain at HKIA while awaiting their test result. The on-arrival test costs HK$499 (S$85).

They must submit a health declaration online before arriving in Hong Kong and must retain the QR code. The declaration can be filled out as early as 48 hours before their arrival.

Those who are work permit or S-pass holders in Singapore and are employed in the construction, marine shipyard or process sectors are not eligible for the travel bubble. Ong said last year that Hong Kong authorities were particularly concerned about this group of workers. Many live in dormitories and have made up about 94 per cent of Singapore's total Covid-19 infections.

Travellers leaving Hong Kong should refer to this site and can expect to pay HKD240 (S$41) for each test. Those going to Singapore are encouraged to book and pay for their on-arrival test, costing S$160 (HK$936), at Changi Airport ahead of time. They can refer to this site.

After taking their test, they should take private transport or a taxi to their declared accommodation and remain isolated there until their test results are confirmed to be negative. Singapore citizens, permanent residents and long-term pass holders can self-isolate at their place of residence but all others must book non-residential hotel accommodation for one to two days while waiting for their test result.

Travellers from Hong Kong to Singapore are required to fill in and submit the SG Arrival card within three days before arriving. Those who are short-term visitors (not citizens, permanent residents or long-term pass holders) need to apply for an Air Travel Pass between seven and 30 days before their intended date of entry to Singapore.

The quarantine-free plan was canned at the eleventh hour previously. Will the same thing happen again?

Which other countries have travel bubbles and how are they doing?

An air travel bubble between Australia and New Zealand kicked off last Monday (April 19), after months of talks and setbacks over several small virus outbreaks in both countries. Media reports pointed to a lopsided demand, with a disproportionate number of travellers departing from Australia.

Wellington Airport painted an enormous welcome sign near its main runway to mark the occasion, while Air New Zealand ordered some 24,000 bottles of sparkling wine for its passengers. But on Friday, New Zealand said it would pause the travel bubble with Western Australia, after regions of Perth and Peel re-entered lockdown due to a traveller testing positive for Covid-19.

Ong, the Singapore transport minister, said this sort of "stop-start situation" was going to be the "norm" for travel bubbles. "Likewise, we have gone through the same with the Hong Kong-Singapore travel bubble and right now I think for us the conditions are right, because our risk profiles are similar," he said on Monday.

Elsewhere, Taiwan's quarantine-free travel arrangement with Palau kicked off earlier this month (April 1), with about 100 Taiwanese tourists on the first flight to the Pacific island nation.