Dr Vivian Balakrishnan will also have a series of bilateral meetings with his UN counterparts as well as meet US representatives based in New York.

Singapore ’s Foreign Minister Vivian Balakrishnan on Thursday (Oct 7) said the Aukus defence alliance highlights Australia’s decision to align closer with its traditional ally the United States, and the pact could have potential benefits for peace and stability in the region.

“Australia has done its own calculation and decided it needs to tack far more closely with America at a strategic level,” he said.

Speaking at a forum organised by think tank Asia Society Australia and Bloomberg, he added that Singapore does not have “undue anxieties” over the new security partnership between the US, Britain and Australia, which has in recent weeks drawn mixed responses from countries in Southeast Asia .

“These are three long-standing partners. We understand their strategic interests. We know this is not directed against us,” the minister said in response to a question on Washington’s engagement with Southeast Asia in light of the Aukus pact.

Singapore hoped the Aukus set-up could contribute constructively to regional peace and stability and complement the existing regional architecture in an open and inclusive way, he said. “As long as these conditions are met, I think this will be positive.”

While some countries in the region, such as Malaysia, have warned that the deal could provoke other powers to behave more aggressively and could potentially start a nuclear arms race, Balakrishnan said he would not “venture into that kind of speculation”.

Instead, he contended that what Southeast Asia wants is peace and prosperity, reiterating a long-time stance that countries are against being forced to take sides in the US-China rivalry .

“We do not want to become an arena for proxy contests or even conflict,” he said. “But depending on the issue, we will take positions according to our own long-term national interests.”

This way, some diversity in views within the region was expected, he said, but it was not something he was worried about.

Read Also
Not possible for Singapore, many countries, to choose between US and China, PM Lee tells BBC 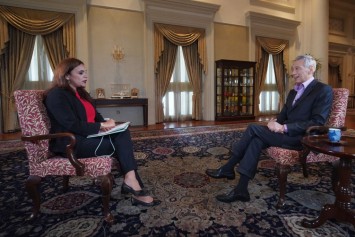 Defence Minister Ng Eng Hen also commented on the Aukus pact earlier in the week. In a written reply to a parliamentary question, Ng said that as a small country, Singapore had to adjust to existing and new groupings.

He noted that the city state facilitates port calls by naval vessels from countries it has good ties with, and would do the same if Australia requests to use its naval bases when its nuclear-powered submarines are deployed.

During the forum, Balakrishnan also suggested that there was no doubt that the US was trying to engage Southeast Asian countries, pointing to his recent meetings – both physical and virtual – with Secretary of State Antony Blinken.

The Singapore minister last month attended the 76th Session of the United Nations General Assembly in New York and had met with Blinken and other officials in Washington. “We are not lacking for attention,” he quipped.

Asked about his assessment of US-China ties, Balakrishnan said tensions have escalated and rhetoric has sharpened but he did not believe it has to be a zero-sum game. Both countries are aware of the consequences if they collide, he added.

“China feels its time has come” and Washington should not expect Beijing to become more like itself, Balakrishnan said, adding that China wanted to be treated as an equal and this means rules and processes may have to be altered to reflect this.

“This is a period of adjustment, recalibration and rebalancing which the two superpowers will have to come to terms with, but the rest of us too,” he said.