Jamie Chua's walk-in wardrobe is a sight to behold. The Singaporean socialite owns one of the world's largest collections of Hermès handbags. Some 200 of them, including the French label's iconic Birkin and Kelly styles in various colours and sizes, take pride of place - kept in full-length glass cabinets at the front of the 700 sq ft, fingerprint-protected wardrobe.

"I tend to pick classic colours over seasonal or limited-edition colours. Reds, pinks and yellows are very much sought after because even though they may not be your usual neutral colour, if you wear these shades, they will make a statement," says the 45-year-old, whose Instagram account @ec24m has more than 900,000 followers. "[My following] is because of the bags - they have a bigger personality than myself. People just want to look at them," she adds.

The most expensive bag in Chua's collection is a S$300,000 (US$220,000) Himalaya Niloticus Crocodile Diamond Birkin, which is encrusted with diamonds.

She also has some 200 pairs of towering heels from the likes of Christian Louboutin, Valentino and Gucci, to name a few. Then there are the clothes. She owns lavish gowns, beautiful dresses, structured jackets and everything in between, from the world's most famous fashion labels, including Chanel, Fendi, Balmain and Saint Laurent. There is more in her wardrobe than can be found in most luxury fashion boutiques.

One brand, though, is about to disappear from her wardrobe - Dolce & Gabbana. A long-time collector of the Italian duo's designs, she is in the process of purging her wardrobe of their clothing, following Stefano Gabbana's racist outburst in the lead-up to the brand's fashion show in Shanghai last year.

"I was disgusted by his comments," Chua says, as she motions to her helper to remove some of the offending pieces from her walk-in wardrobe. "Please make sure their clothes are not in the photographs."

Dressed head to toe in Dior - whose current creative director, Maria Grazia Chiuri, is known as much for her feminist statements as for her feminine designs - there's no doubt Chua, an entrepreneur as well as a social media star, is very savvy about her public image.

"I don't like to spend on seasonal things in general. For example, I bought this Dior dress in several colours, as I know I can wear them a few years later and they won't look dated," says Chua,

The photographs posted on her Instagram account, featuring her posing against an exotic cityscape or a lavishly decorated interior, are edited to convey a specific "feel, tone and quality", she says. Some images feature products or services that she endorses; almost every post is tagged with the brands of the items she is wearing.

Part of Chua's popularity lies in the public's fascination with her Crazy Rich Asians-like story; she was working as an air stewardess for Singapore Airlines when she met Indonesian businessman Nurdian Cuaca. They married when she was 20, and Chua has said in an interview on Indonesian TV programme Silet that they had to struggle for 10 years before he made it rich. Their divorce in 2011 made headlines.

Eight years on, Chua, who has two grown-up children, Calista and Cleveland, looks to be in a happy place. Her 10,000 sq ft home in Singapore is decorated with portraits of herself, her collection of contemporary art, and designer touches, including Hermès throw cushions and a Versace bedspread. Her boyfriend, lawyer Terence Koh's, Dior bicycle stands in a corner by the dining area.

Chua, who was once the distributor for Manolo Blahnik shoes in Singapore, continues to seek out business ventures. Her latest investment is in an aesthetics clinic and a bespoke skincare range.

She acknowledges that she does not need to work but does so to have a sense of purpose. "I feel that everybody should have work. A person with no work has no goal in life. It is not about how much money you have, it's about feeling you are useful for something," she says.

"I'm not gonna sit and think, 'I'm just going to spend money'. It is just very meaningless. I've done that for a large part of my life but I was very unhappy when I was that person. I'm happy now." 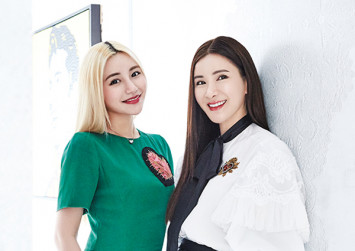 She keeps busy also to set an example for her two children. "Children these days are so privileged, they can spend $2,500 on one item. Do you think they can work in a job that pays a starting salary of a few thousand dollars? So I try to instil values in my children by showing them a good example."

A significant amount of her time is spent curating her Instagram feed - and to think she started the account for a lark. She wanted to follow her daughter, who had one already, and began posting pictures for fun. She soon realised she had hit on a winning formula when even "very ugly" photographs taken with her phone of her bags grouped according to their colours would garner "a lot of eyeballs", she says.

Koh bought her a compact camera, which spurred her to learn to take better photographs. "As I improved myself, advertisers started to take notice of me. Now I really just do paid posts on Instagram," says Chua. She and Koh have amassed a collection of Leica cameras as well as video cameras that she uses to produce content.

She maintains a separate account, @iamjamiechua, to which she posts unedited photographs of her and her friends attending soirees around the world. It has over 100,000 images.

At weekends, or when they travel, Koh, her "Instagram husband", takes the pictures. "We travel a lot for specialty restaurants that we will do research on and make reservations in advance for. I also travel for the scenery, to get good content for my Instagram," she says. Often she packs props such as fairy lights or flowers to style her photos.

Koh is more high-maintenance than she is, Chua says with a laugh. "I'll choose my hotel room for the view because I just want a good picture. But he won't stay in a less than luxurious hotel," she says.

She recalls a trip last year when they flew to Italy specifically to dine at the three-Michelin-star Osteria Francescana of chef Massimo Bottura in Modena. For convenience, they decided to stay in a nearby inn in the town. Unfortunately, it was not quite a five-star joint.

"We had to climb up four flights of tiny stairs and the room had the most basic living conditions, like a hostel - I felt like a kid. I tried to make the best of it by sitting by the window and enjoying an espresso. But he fell ill!"

What happened to their long-awaited meal?

"He had been looking forward to this meal his whole life, but I ended up eating it by myself," she says. He managed one bowl of grandma's tortellini soup.

"I tell you, he's not going to suffer with me to get my window frame view," she adds.