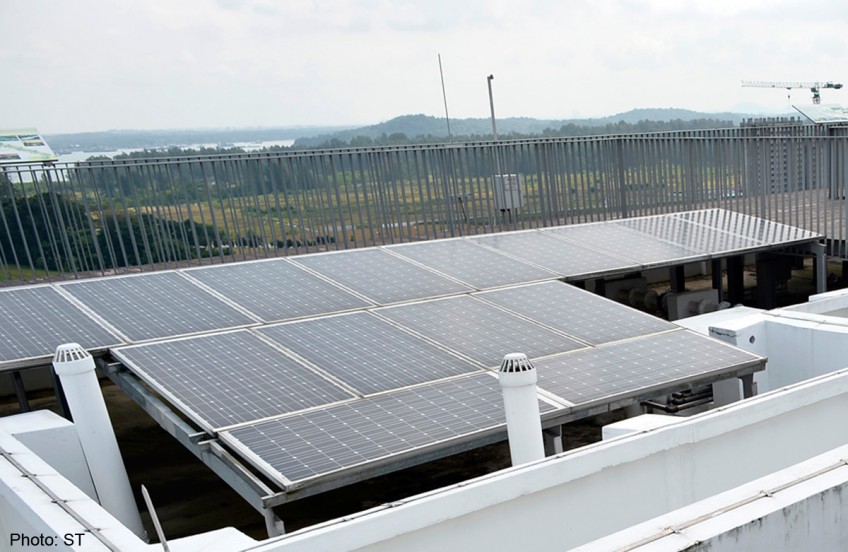 Solar panels on the roofs and the Eco Deck at Treelodge@ Punggol, the Singapore Housing and Development Board's first eco-precinct.

Singapore generates 95 per cent of its power from natural gas and currently has only 25-30 megawatt-peak (MW) of photovoltaic capacity installed, around 8 per cent of the national target of 350 MW by 2020.

Together with Oslo-listed Renewable Energy Corporation (REC), Singapore's PacificLight Energy (PLE) is offering a hybrid electricity bundle to commercial and industrial users that consume at least 4,000 kilowatt-hour (kWh) a month.

Under the collaboration, consumers can consolidate two streams of costs - one to REC for solar-generated electricity at a fixed cost per kWh, the other to PacificLight at prevailing grid prices - into a single bill, unlike most set-ups where consumers have to pay the solar seller and power generator separately.

"Once you have made the (solar panel) instalment, you are not subject to any (price) volatility," said PacificLight's chief executive officer Yu Tat Ming.

Solar power use is rising fast around the world as module prices are down 75 per cent since 2009.

Singapore's electricity tariff, by contrast, rose by almost a third between 2009 and 2013, official data shows, driven by a tight oil and gas market during that time.

The relatively high electricity price and falling solar costs have helped Singapore join a host of countries, including most of Europe, the United States and Japan, to achieve grid parity, in which solar costs break even with electricity sale revenues, Deutsche Bank estimates showed.

The bank said in its 2015 solar outlook that solar systems will be at grid parity in up to 80 per cent of the global market within three years and that grid parity without subsidies already existed in many regions.

The technology is already in use on a large scale in parts of Europe and the United States, and China raised its target of solar installations by 20 per cent in order to fight pollution.

"It's a minor hiccup. For a 40 year plan to do something, this afternoon's price is just blip," Cooper said.

Brent crude prices have tumbled by as much as 60 per cent since its peak in June last year as high output clashes with slowing economic growth and improving energy efficiency.