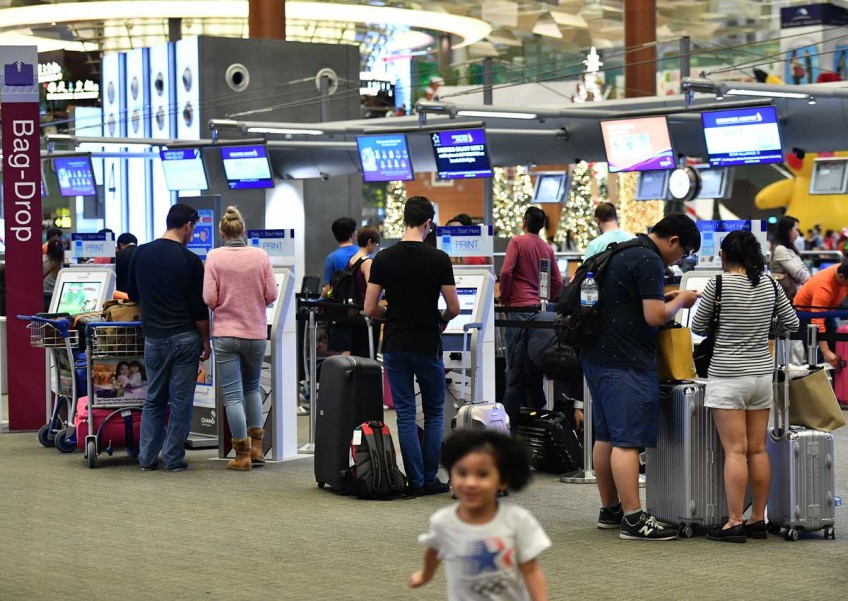 Passengers at the check in touch points at Changi Airport Terminal 3 on 23 December 2016. "The Singapore Police Force, together with the Civil Aviation Authority of Singapore, are monitoring developments," the agencies told The Straits Times, when asked if Singapore might change its flight security protocol.
ST file photo

In one of the biggest disruptions to the air travel industry since the 9/11 terrorist attacks, Canada and France have joined the chorus of countries seeking to ban travellers from carrying laptops, tablets and other large electronic devices on flights from certain airports in the Middle East, Turkey and North Africa.

The United States and Britain have already initiated such moves while Singapore is keeping tabs on these developments, which could inconvenience business travellers.

Read also: US bans laptops, tablets on flights from Turkey and Arab world
Intelligence shows IS developing ways to hide explosives in electronic devices: US official
What you need to know about the new air travel device restrictions

"The Singapore Police Force, together with the Civil Aviation Authority of Singapore, are monitoring developments," the agencies told The Straits Times, when asked if Singapore might change its flight security protocol.

Those flying to the US and Britain from the selected airports can carry regular-sized mobile phones but all other devices must be checked in.

Canada and France are considering similar measures, sparking fears that other countries could follow suit.

The measures are almost certain to deal a blow to the three big Middle Eastern carriers: Dubai's Emirates, Abu Dhabi's Etihad Airways and Qatar Airways, which is based in Doha. More than nine in 10 passengers who fly these airlines do a stopover in Dubai, Abu Dhabi or Doha en route to their final destinations in the US, Europe or elsewhere.

All three hubs are on the US list of 10 airports that the ban applies to. The British ban affects flights from Turkey, Lebanon, Egypt, Saudi Arabia, Jordan and Tunisia.

Travellers at Changi Airport flying to the US or Britain on airlines that stop at the targeted airports will have to ensure that their laptops and other large electronic gadgets are checked in. If they do not do so, they risk having their items confiscated.

This could mean factoring in extra time at the airport, said the International Air Transport Association (Iata).

Since passengers will have to check in their larger devices, there are also concerns about fire risk from lithium batteries. The International Civil Aviation Organisation said that incidents involving devices containing lithium batteries may be more easily mitigated in the cabin than in checked baggage.

"Finding an effective balance between safety and security approaches is always a priority in global aviation," it said. It was up to individual countries to strike this balance, it stressed.