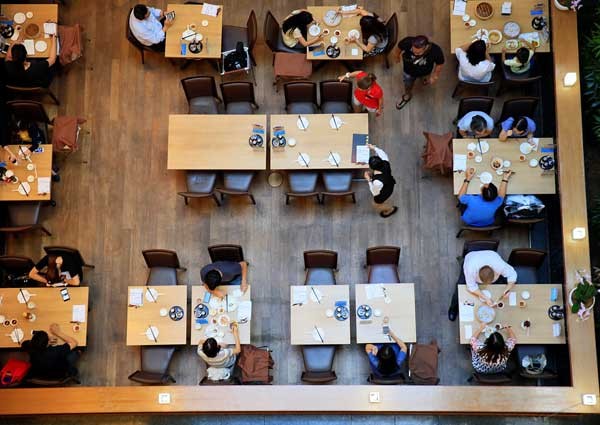 People dine in a restaurant at a mall in Singapore May 18, 2017.
Reuters

SINGAPORE - Singapore's shopping centres, intent on keeping units filled and luring back patrons, are renting space to eateries far beyond industry norms in what observers say is a glimpse of how malls are coping with the online onslaught on brick-and-mortar stores.

The often-billed shopping paradise, with Asia's highest retail space per capita, has seen vacancy rates and rents near their weakest in at least six years - metrics which place its malls among the worst-performing of the region's bigger economies.

Malls globally have long been countering Internet shopping by adding features not easily replicated online, such as cinemas and schools, but the impact of changing consumer trends is more pronounced in Singapore due to an oversupply of retail space.

To make up for lost revenue, Singapore mall operators have doubled the space for food and beverage (F&B) tenants compared with a decade ago to as much as 40 per cent, analysts said, even though it is costly to refit units to accommodate kitchens, while rents can be lower than for fashion stores, for instance.

They are adding more activity-based tenants and facilities that"provide a little bit more sustainability away from e-commerce".

Real estate services firm JLL put F&B space in Singapore malls at over 30 per cent, compared with 23 per cent in rival shopping destination Hong Kong and 10-15 per cent in Europe.

In September, M&G Real Estate reopened its Compass One mall in the island's north-east with 33 per cent of space allocated to F&B outlets, from 20 per cent before a year-long refurbishment."F&B, in Singapore, I will consider that as rather non-discretionary," said Ng Chiang Ling, M&G Real Estate's Asia chief executive.

"So that was one of the key things - offer more F&B (and) to offer more choices."

"Regionally, other countries will definitely look at us in terms of our offerings, and we can be used as a reference as well," said Singapore-based Diane Aw, head of retail services at property consultancy Colliers International.

Singapore has about 11.6 square feet of retail space per capita, showed data from JLL. That compared with Hong Kong's 11.5 square feet, Bangkok's 8.6 and Shanghai's 4.8.

But its retail vacancy rate hit 8.4 per cent in July-September, the highest since at least January-February 2011, government data showed, increasing the pressure to fill units.

"Malls have been providing more room for negotiation compared with a few years back," said Vincent Tan, managing director at Select Group, which runs Peach Garden and Texas Chicken restaurants.

"We have been able to strike better deals with regard to rent." To be sure, F&B is just one means of countering a downturn, with others including loyalty programmes and technology to track shopping behaviour.