People cross a street during the morning peak-hour commute in Singapore on June 3.

Sales consultant Kirstin Goh, 38,was relieved when she landed a job in November last year. She had spent her whole career working for relocations companies and rose to manage a team of four, but was made redundant in 2018 amid dwindling demand for relocation services as employers increasingly did away with expatriate compensation packages that included this perk. Little did she know a pandemic would soon hit the world, accelerating her industry’s decline.

In March, after just five months, she was again let go from her job – this time finding housing for people moving across the globe. Since January, she said, a trend of cancellations snowballed until “with these restricted movements” worldwide almost all her prospective clients had pulled out. “We were a team of 20 and now the whole team is gone,” she said.

Goh is one of the many Singaporeans whose livelihoods are expected to take a hit amid the economic fallout from Covid-19, in what is shaping up to be one of the worst global recessions in living memory. Singapore ’s trade ministry has predicted that the bellwether economy could shrink by up to 7 per cent, a level not seen since it gained independence, as economists forecast 200,000 to be out of work in the city-state by the end of the year.

Those in the middle of their careers like Goh have it worse, experts say, citing how they would find it hard to compete with fresh graduates as they are often perceived as inflexible and unable to quickly adapt to fast-moving work environments.

Meanwhile, the pandemic is reshaping the jobs market as it decimates industries such as tourism that rely on international travel, and accelerates the process of digitalisation as public health measures such as social distancing push companies to rely more on technology. For senior research fellow Faizal Yahya from the National University of Singapore (NUS)’s Institute of Policy Studies, the pandemic has merely hastened the latest technological revolution that requires companies to increasingly operate in the online space – capturing customer data and leveraging it to tailor their products and services, for example, with many feeling the “need to enhance remote working by ensuring connectivity and seamless work process flows”.

These global trends prompted Prime Minister Lee Hsien Loong to warn in his Labour Day Address that workers in sunset industries would need to reskill and take up jobs in new sectors.

Chen, 40, who asked to be identified by only her surname, works at a company that prints wall murals, backdrops, banners and the like for events, conferences and exhibitions. She worries that the shift towards holding such gatherings online might become permanent and printing work would dry up.

Jessie Wong, 34, has already seen her role at an NGO disappear. As Singaporeans headed back to the central business district on Tuesday when a partial lockdown was lifted, Wong was there to pack her belongings. Her employer said it needed to “rethink its operations and strategies”. 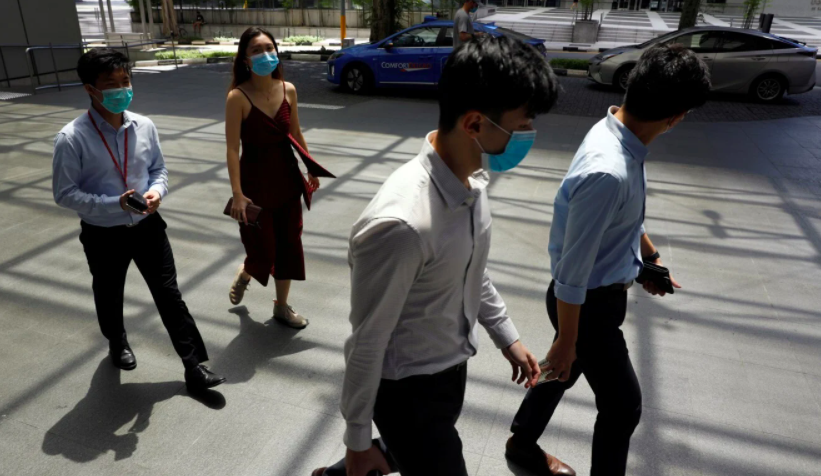 Professionals, managers, executives and technicians make up about 60 per cent of Singapore’s workforce today. PHOTO: Reuters

Even before the pandemic, the bulk of Singapore’s redundancies came from a section of the labour force that the government groups together as professionals, managers, executives and technicians (PMETs). In the last quarter of 2019, seven in 10 redundancies were from this group, with 70 per cent of these workers older than 40. In 2008, fewer than four in 10 redundancies were from among Singapore’s PMETs, but this sector of the workforce has also grown from 40 per cent in 1998 to about 60 per cent today.

A period of “extended uncertainty” over when business and travel can resume and Singapore’s economy will rebound in the wake of the pandemic makes it likely that the effects of the looming recession will be even worse than the depths of the global financial crisis in 2009, when 40,000 people were made redundant, according to labour economist Walter Theseira.

Even though Singapore has lifted its so-called circuit breaker restrictions, only some businesses such as hairdressers, dentists and chiropractors have been allowed to reopen in phases. Bars, gyms and most retail shops remain closed, and dining in at eateries is still barred.

“The current crisis is broad based, affecting virtually every sector with exposure to in-person consumption and travel, so the quick rebound that helped many after the global financial crisis may not materialise,” Theseira said, pointing to how even at the height of that calamity in 2009, Singapore’s economy grew by 0.1 per cent.

Goh has been applying for jobs since March but has had no luck so far. “Maybe my industry is just too niche that employers find my skills irrelevant. The only skills [I have] that are transferable to another industry could be customer service roles or perhaps sales, but the pay they provide is less than S$3,000,” she said.

Job hunting was “always more complex” for mid-career professionals because of their specialisations, said Theseira, an associate professor at the Singapore University of Social Sciences. “Their skills and experiences lead to better pay in their field, but may not translate to success outside of it – so if some parts of the economy are doing very badly, it’s not easy for mid-career professionals to move to another industry that’s doing better.”

Working long hours and staying many years with one company are no longer key in keeping one’s job in the new economy - Kitty Tan, director of recruitment firm EPS Consultants

Kitty Tan, director of recruitment firm EPS Consultants, said such workers were often “too expensive to hire” and were perceived to lack a flexibility in mindset which would result in their inability to “catch up” in a rapidly changing work environment.

Employers were also likely to deem fresh graduates or early-career workers as more adaptable to job demands, even more so in the “new normal” where more companies moved towards digitisation, said Lee Ju Ye, an economist at Maybank Kim Eng.

“For mid-career workers to find their feet again in the post-pandemic new normal would be rather challenging if they are unable to constantly upgrade their skills to meet the demand of the evolving economy,” Tan said. “Working long hours and staying many years with one company are no longer key in keeping one’s job in the new economy.”

Workers in the manufacturing, retail, aviation and tourism industries were likely to be worst hit, Tan said, as jobs dried up and employers demanded greater digital literacy. 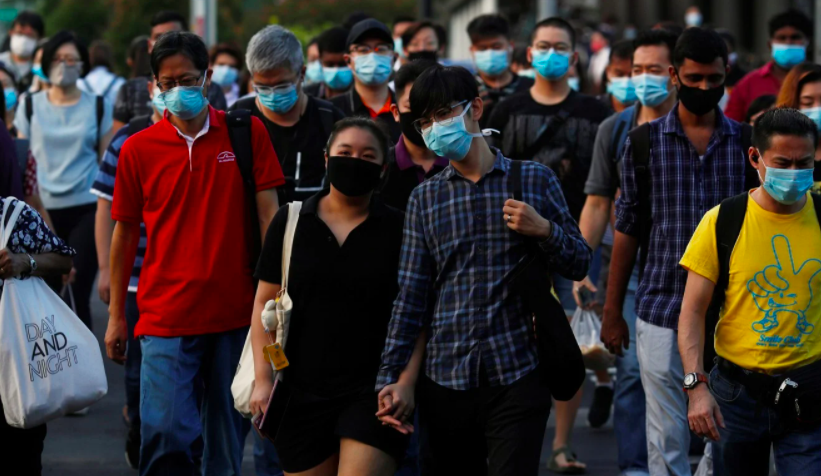 People cross a street during the morning peak-hour commute in Singapore on June 3. PHOTO: Reuters

Singapore has long pushed for full employment through methods such as retraining, but the focus has narrowed of late with regard to mid-career workers – employees who were part way through building their careers when they found themselves unemployed. The government has in recent months pledged to help such workers land new jobs.

Trade Minister Chan Chun Sing said in March that authorities were particularly aware of such concerns among workers aged between 40 and 50, and that the city state was on track to see a doubling of job placements for this group to about 5,500 by 2025, mostly through “redesigning, reskilling and recruiting”.

Finance Minister Heng Swee Keat said last week that “special attention” would be paid to mid-career professionals as he announced a S$2 billion (US$1.4 billion) jobs and training initiative as part of a fourth set of economic stimulus measures.

From next month, a mid-career traineeship scheme is to be rolled out, providing some 4,000 opportunities for jobseekers to “learn new skills and embark on new careers”, said Heng, adding that under the scheme, trainees would be paid a monthly allowance of S$1,200 (US$856) to “help them focus on their training and job search”.

The government is further providing incentives for employers to hire local workers who have been through the traineeship scheme, with business owners who hire workers aged over 40, for example, being reimbursed for 40 per cent of their salaries, capped at S$12,000 each.

Theseira said traineeships helped address a key problem that mid-career professionals moving to different sectors or roles faced: they needed time to prove that their existing skills are transferable and to build new ones, as companies would not risk paying them high wages without proof of this.

The 4th Covid-19 support package, known as the Fortitude Budget, is aimed primarily to help workers and businesses to tide over the crisis and the bleak economic outlook ahead — So which part matters the most to you? We break it down. Click our #linkinbio to find out more about the Fortitude Budget! #singaporebudget2020 #singapore #stayunited #sgunited #coronavirus #covid19

Even so, some, including Goh, are worried. Not only do these types of training programmes typically take place at night, she said, making them near impossible to attend with young children at home that need to be cared for, but the allowance on offer would also not be enough to support her family of five. “I am willing to go for upgrading, that’s for sure, but if we are going to put the family in hardship, then I really don’t know how I am going to do it,” she said.

Theseira said that the allowance was “really just to help people tide things over” amid an expectation that mid-career professionals would be better positioned to draw on personal savings than lower-wage workers.

Still, Senior Minister Tharman Shanmugaratnam, who chairs a new National Jobs Council that oversees the job schemes, on Wednesday sought to assure citizens. He said that the scale of the programmes was “well beyond any past experience”, adding that some 100,000 new vacancies, traineeships and skills training places would be created in the next 12 months. He also made clear to employers that they should do their part.

“No employer should think that someone is ‘too old to hire’. Or think that those with higher skills are simply ‘overqualified’ or ‘not adaptable enough’. The government is providing very strong support for employers, and every employer must be part of our national team in overcoming the jobs challenge. Those who prefer to stay on the sidelines will find themselves being asked tough questions by [the Manpower Ministry] about how they are abiding by the Fair Consideration Framework,” he said in a Facebook post, referring to government guidelines that require employers to consider Singaporeans fairly for all job opportunities before hiring foreigners.

Faizal of the NUS Institute of Policy Studies said companies would be “very cautious” when it came to creating jobs in this climate while struggling with efforts to digitise their businesses. He suggested the council look at how job sectors could evolve, including sectors heavily impacted by the pandemic such as tourism, hospitality and retail. Predicting their route to recovery could help the council create job opportunities, he said.

Moving forward, Theseira said the council would need to develop a better understanding of how to match skills training at universities or workplaces with higher productivity and wages.

He said jobseekers of all ages seemed to lack knowledge of the value of different types of skills at the workplace, including soft skills, adding that most had only a superficial understanding of career progression and would fall back on “old ideas”, such as studying for a master’s degree or other academic qualification to break out of a career rut.

“People need help to understand how it is that they actually make breakthroughs to reach the next stage in terms of seniority, expertise, wages,” he said.

“Others may ignore a career path that actually has good progression because the starting point is unattractive.”