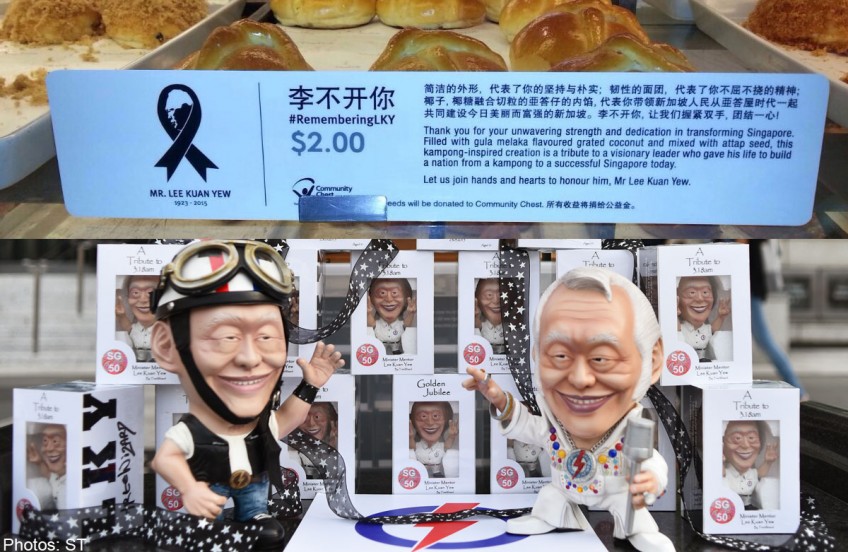 SINGAPORE - A Lee Kuan Yew bun or figurine? The death of Singapore's founding leader on Monday has spawned unusual tributes and business ideas, ranging from the reverent to the ridiculous.

As tens of thousands of people pay their respects to the 91-year-old former prime minister's remains in parliament ahead of his funeral on Sunday, a mini-industry inspired by Lee's death has sprouted.

Singaporean food chain BreadTalk was forced to apologise after it was slammed online for introducing a new bun it called a tribute to Lee, promising that proceeds from sales would be given to charity.

"We regret that this product has caused much concern and appreciate the public's feedback, which we take very seriously," the company said on its Facebook page as it pulled the item off from its shelves.

Even a prominent young member of Lee's ruling People's Action Party (PAP) came under fire for naming an exercise routine he invented the LKY91, after the late leader's initials and age.

One reader reminded the MP, Teo Ser Luck, on Facebook to be "sensible enough to know it is the mourning week for (the) whole nation".

One tribute came in the form of an online petition on the website Change.org to rename Singapore's famed Changi Airport to Lee Kuan Yew International Airport.

At least 758 people had signed the petition as of mid-afternoon Thursday.

A Singaporean artist, Christopher Pereira, who has been making Lee figurines since 2009, said business was brisk following the leader's death. He had set up a stall near parliament.

"Over the last few days, I have been getting an overwhelming number of orders, as people want to buy them as a tribute to him," Pereira told AFP.

"Some have been crying on the phone. People are emotional during this period and they want a memento to remember him by," added Pereira, whose humourous creations cost Sg$200-$g$8,000 ($146-$585) each.

The figurines come in three types, including one dubbed "Elvis Lee" after the US rock and roll legend.

Another is called "Mao Lee" after the Chinese communist leader.

"I'm sure Mr Lee, who lived through (the Elvis Presley) era had listened to Elvis' songs like 'Love me Tender'," said Pereira.

Singaporeans also took to the Internet to express their grief. Many blacked out their Facebook profile pictures or adopted avatars with his portrait.

Some paid tribute with their tongue firmly in cheek.

Administrators of the satirical Facebook page SMRT Ltd (Feedback) posted an old photo of a youthful Lee posing with his wife, holding a cigarette in one hand and a glass in another.

"In memory of the original badass," the page administrators wrote of the leader, who eventually became a health fanatic who neither smoked nor drank.

On photo-sharing platform Instagram, many shared artwork and caricatures of the revered leader.

Drawings of Lee reunited in the afterlife with his wife Kwa Geok Choo, who died in 2010, have also been circulating online.

One enthusiast painted the hood of his yellow Lotus sports car with the black ribbon featuring a silhouette of Lee's face.