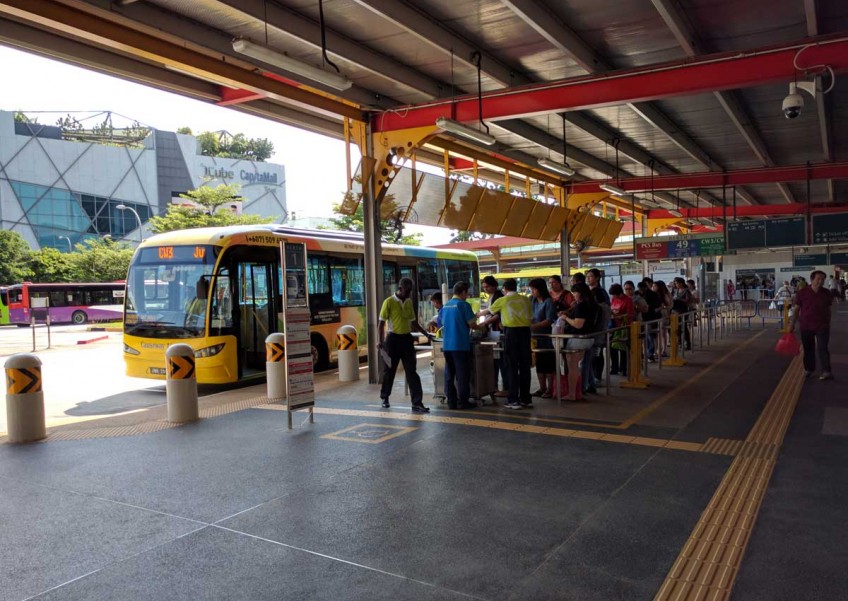 About 30 people were waiting for the CW3 Causeway Link service to Taman Bukit Indah in Johor Baru at Jurong East Bus Interchange around 4pm yesterday.
The Straits Times

Muslims in Singapore are planning to travel to Malaysia for Hari Raya Puasa today, despite the terror attack in Kuala Lumpur.

The fact that Hari Raya Puasa falls on a Wednesday also did not dampen their mood, although some have taken leave from work in order to have a longer break.

Ms Aida Abdul Rahim, 24, an associate librarian at the National Library Board, said her family usually left at 6am on the day of Hari Raya itself in previous years to avoid the jam on the eve of the public holiday.

"Usually at that time the jam is not much of a problem. If we leave at around six we can expect to reach my grandparents' house in Johor at around 7am."

She said the midweek Hari Raya meant that they have a break in between visiting and eating.

Hari Raya Puasa marks the end of the Muslim fasting month, and is a day when many Muslims visit their extended families and partake in large family meals together.

When The Straits Times visited the Jurong East Bus Interchange, which hosts services to Johor Baru, there was a line of about 30 passengers waiting for the 4pm Causeway Link CW3 service.

Madam Sarina, 50, a nurse at Mount Alvernia Hospital, said: "My four children are studying in Malaysia, but my husband and I work in Singapore, so we are taking two days of leave to spend more time with them."

Madam Noraini Mohd Kassim, 53, a quality assurance auditor in the biotechnology industry, said: "If I have to be there, I have to be there. It may look peaceful and quiet, but these things can happen anywhere. We cannot worry and dwell on it too much. Life goes on. If I happen to be at the wrong place at the wrong time, then so be it."

The Ministry of Foreign Affairs issued an overseas travel advisory on Monday asking Singaporeans to remain vigilant while travelling overseas and to stay alert to local security developments.

This article was first published on July 06, 2016.
Get a copy of The Straits Times or go to straitstimes.com for more stories.