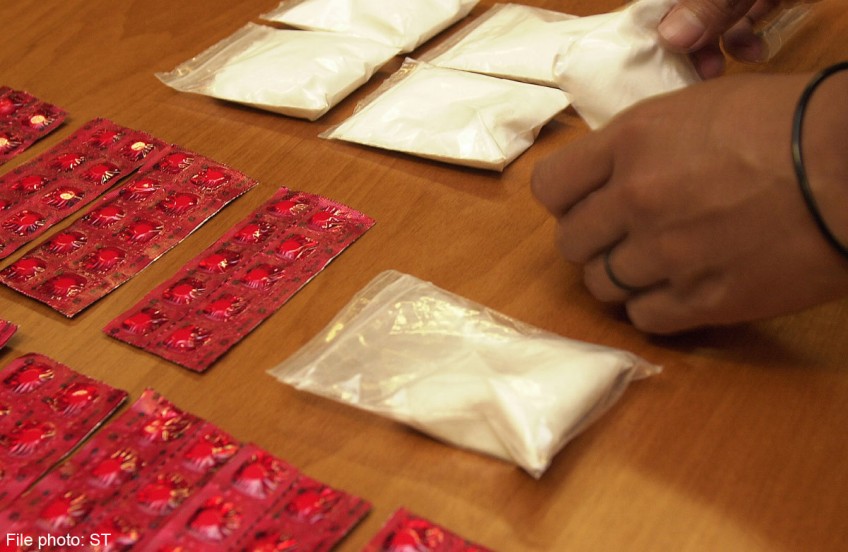 In Singapore, the National Council Against Drug Abuse (NCADA) marked World Drug Day on June 26 by reminding our children of the dangers of drugs. Alongside our anti-drug laws, enforcement officers and rehabilitative agencies, NCADA aims to build strong social resistance against drug abuse.

Like other anti-drug policymakers and community leaders across the globe, I am alarmed at the recent momentum of the pro-drug lobby.

Singapore's zero tolerance against drugs has worked well so far. But for a small, cosmopolitan and open country like Singapore, this is being eroded. We will have to join with like-minded partners to resist the pro-drug lobby for the sake of our children's future.

In particular, we must fight the cannabis legalisation agenda. The pro-drug arguments to legalise the drug trade are cunningly couched in eloquent socio-economic and health-based cost-benefit arguments. The ulterior motive is profit. Our children must know the truth is drugs are harmful no matter how you package it!

The effects of legalising cannabis will be far-reaching. Currently, chocolates and even soft drinks laced with cannabis are being advertised in the US states where cannabis has been legalised. Reports have surfaced of deaths and health consequences among children and teenagers due to consumption of cannabis-laced food and drinks.

The United Nations drug conventions of 1961, 1971 and 1988 prohibit the use, possession and supply of cannabis (also known as marijuana).

Under US federal law, marijuana is classified as a substance with high potential for dependency and no accepted medical use. Yet, 20 states in America have allowed the medical use of cannabis. Colorado and Washington state have legalised the production, sale and consumption of cannabis.

US pop culture, celebrities' "medical" use of marijuana and pro-drug campaigners also promote the false notion that marijuana is harmless, to build a new multibillion-dollar drug market targeting our children and impressionable youth.

Domestically, we need to watch for second-order effects of the estimated 2,000 repeat drug abusers released from long-term imprisonment last year and this year. Second-order effects refer mostly to effects from rejection of inmates by society and their families. Some may turn to old habits or even influence others to take up the drug habit.Further, we need to guard against the acceptance of more liberal attitudes by our youth towards drugs. The latest NCADA Youth Perception Survey found that while our youth still regard drugs and drug abuse negatively, the older youngsters aged between 17 and 21 appear more susceptible to liberal attitudes towards drugs.

Externally, Singapore has to contend with the proliferation of drugs regionally and the emergence of new psychoactive substances. In countries where the authorities are struggling to contain the drug scourge, organisations with a more liberal social stance have opted for "harm reduction" where health concerns such as the spread of HIV through sharing of needles have outweighed the harm of drug abuse.

Singapore professes "harm prevention" and upholds zero tolerance against drugs. What counts is the kind of society that we want our children to grow up in.

I attended the World Forum Against Drugs in Stockholm recently. Initially, I was fired up to defend Singapore's anti-drug stance, thinking we were in the minority. Instead, I was heartened to find many government agencies and non-governmental organisations presenting scientific evidence to debunk the pro-drug lobby. What struck me was the heavy Euro-US centric presence. This was not surprising as the forum was held in conjunction with the "Europe Cities Against Drugs" Forum where mayors of European cities who oppose the pro-drug lobby gathered to share best practices and concerns.

The United Nations General Assembly Special Session (UNGASS) is scheduled for 2016. The previous session in 2009 focused on achieving a drug-free world. The pro-drug lobby is well organised and amply funded to push for a rethink of this zero-tolerance approach.

The pro-drug lobbies in Europe, Latin America and the US are intent on removing the prohibitive UN provisions against drugs.

There is an urgent need for governments and civil society to unite in an international coalition of like-minded anti-drug advocates to oppose the pro-drug lobby, and ensure a robust position at the 2016 UNGASS.

Even as NCADA works with regional partners, I am confident that Singaporeans support our zero tolerance stance on drugs. Ultimately, we are fighting for the right of our children to grow up in a drug-free Singapore.

The writer is chairman of the National Council Against Drug Abuse (NCADA).