Malaysian government adviser Daim Zainuddin has said neighbouring Singapore's recent willingness to hold talks on the price it pays Kuala Lumpur for water - a long-standing sticking point - is a "major development" in the warming of ties after a diplomatic spat last year.

However, he also believes the Lion City may be stalling for time as it heads towards self-sufficiency in its water supplies.

In an interview with the South China Morning Post, Daim echoed conciliatory comments made by the leaders of the two countries at an annual retreat last month.

Malaysian Prime Minister Mahathir Mohamad and his Singaporean counterpart Lee Hsien Loong in that closely watched meeting had sought to emphasise that their countries had agreed to find middle ground over a range of issues that sparked a war of words in December and January and sunk the relationship to a multi-decade low. The neighbours have had a testy, albeit largely peaceful, relationship since they acrimoniously split in 1965.

Daim said that during a recent private visit to the Lion City, the Singaporean leaders that he had met had struck an upbeat note.

"In the end I said, we are neighbours. We can't change our geographic location. We have to be together, and we are intertwined. There is nothing we can do but sit down and discuss so that both can benefit," Daim told the South China Morning Post last week.

The businessman, 81, is a close confidante of Mahathir and last year was appointed the chairman of the prime minister's Council of Eminent Persons.

He served two stints in government during Mahathir's previous stint as prime minister.

During Mahathir's first stint in power - from 1981 to 2003 - he forged a strong personal relationship with Singapore's founding prime minister Lee Kuan Yew - father of the current prime minister Lee Hsien Loong - after Mahathir made him the point person in dealing with the city state.

He continues to enjoy close personal ties with the younger Lee and his wife Ho Ching, the chief executive of the sovereign wealth company Temasek Holdings.

Daim said Singapore's willingness to "come to the table" over the water price issue was itself a "major achievement".

Singapore's long-standing position has been that it has no obligations to review the terms of a 1962 deal under which it is allowed to draw up to 250 million gallons of water daily - about 60 per cent of its needs - from Malaysia's Johor River at a price of three sen (less than a US cent) per thousand gallons. 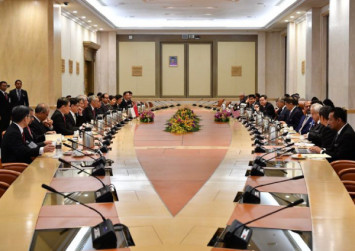 Malaysia in turn is allowed to buy back treated water from Singapore at a subsidised rate.

Currently it buys around 16 million gallons of water a day.

Singapore's foreign ministry says the terms of this pact cannot be changed until it expires in 2061 because Mahathir passed up on the chance for a review at the 25-year mark of the deal in 1987, during his first stint as prime minister.

Malaysia interprets the agreement differently - it believes it has a right to review the price any time after the 25-year mark.

"If you look at the agreement, it says that Johor has the right to review the price of water sold to Singapore after 25 years. It does not say that a review can happen only in the 25th year," Daim said.

With the two countries' attorneys general currently in talks to set their respective positions on the matter, Daim said he believed "Malaysia has some good legal grounds, and hopefully our attorney general will be able to convince the Singapore side".

Still, he suggested the Lion City may be playing for time by sticking to its position that there is no room for the deal to be amended.

Foremost in Singapore's argument is that because the water pact is guaranteed by the "separation agreement" between the two countries that authorised its secession from Malaysia in 1965, an amendment of the water deal could disturb its sovereignty.

Daim offered an alternative theory. "The 1962 agreement expires in 2061. We believe by then Singapore would be self-sufficient as far as water demands are concerned and would no longer need to purchase raw water from Malaysia," he said. "So maybe Singapore is trying to stretch the dispute till such a time when it can tear up the agreement without any loss."

Reiterating Mahathir's complaints that the three sen price was outdated, Daim offered further figures to justify why he thought a price review was urgently required.

"Imagine this - Singapore pays a mere 7,500 ringgit for its daily supply of 250 million gallons of water from Johor," he said. "In Singapore dollars that's about S$2,500. On the flip side Johor [the Malaysian state bordering Singapore] has to pay 50 sen per 1,000 gallons of treated water from Singapore. That's almost a 1,570 per cent profit," he said.

Both sides have previously argued that they subsidise the other party's water supply. Singapore says the treated water Malaysia buys back from it is heavily subsidised because the city state pays for the upkeep of the waterworks and treatment plants. Malaysia, in turn, says it has subsidised Singapore to the tune of 2.4 billion ringgit since 1962 because of the three sen price.

On Wednesday, Singapore's Foreign Minister Vivian Balakrishnan told parliament the two attorneys general were continuing their discussion over their positions on the 1962 water agreement.

Among Singapore's concerns about any future price review - spelt out by Lee during his April meeting with Mahathir - is pollution in the Johor River.

Malaysia has also started drawing more heavily from the river in recent years, raising questions over whether the yield is sustainable.

"These issues, if not addressed, will compromise Singapore's right to extract our full 250 million gallons a day entitlement of water under the 1962 Water Agreement," Vivian was quoted as saying by The Straits Times.

Apart from imported Malaysian water, Singapore also relies on reservoirs, desalination and recycled wastewater, or NEWater, for its water needs.