A ship docks at Keppel terminal in Singapore. The country’s manufacturing sector has grown, even though the services and construction sectors are still sluggish, according to economists.

Singapore's economy exited negative territory in the first quarter of this year after three consecutive quarters of contraction, signalling that the trade-reliant city is set to recover steadily.

The country's export-dependent economy grew 0.2 per cent from the same period last year, according to advance estimates released by the trade ministry on Wednesday, rebounding from -2.4 per cent in the fourth quarter. On a quarterly seasonally adjusted basis, the economy grew 2 per cent.

The growth was driven primarily by the manufacturing sector, which expanded 7.5 per cent year on year, propped up by output expansions in the electronics, precision engineering, chemicals and biomedical manufacturing clusters, the trade ministry said.

However, analysts warned the worsening coronavirus situation in Southeast Asia and the slow vaccine roll-out in the region could threaten the rosy outlook.

Lee Ju Ye, economist at Maybank Kim Eng, noted the services and construction sectors were still "sluggish", and this could be due to the lack of significant resumption of activities from the fourth quarter of last year to the first quarter of 2021.

Read Also
Singapore, Malaysia to discuss reopening of border during Muhyiddin's visit on May 4 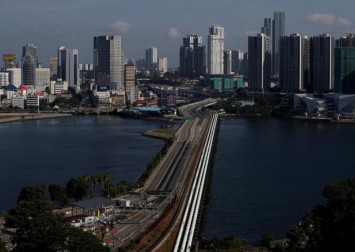 Singapore entered its third phase of reopening on December 28, which saw the easing of some Covid-19 restrictions, including allowing social gatherings of up to eight people. Some events could be held but with a small number of people permitted.

It was only this month that a further easing was announced, allowing 250 attendees for wedding receptions and 750 for live performances, business events and sports events.

"More people are going back to the office and mass events are resuming … this could help some of the sectors like catering which have struggled to recover," she said.

For example, she said Singapore was starting talks to reopen borders with neighbouring Malaysia, and there was also buzz surrounding the different travel bubbles that the country was discussing with places such as Australia and Hong Kong. Singapore has also ramped up vaccination efforts, she said. As of April 6, close to 20 per cent of its 5.7 million population had received at least one jab, according to official figures.

Apart from that, Ling said China's quick recovery from the pandemic would bode well for Singapore and the region. Beijing's economy grew 2.3 per cent in 2020, in a dramatic turnaround since Covid-19 ravaged the country in the first few months, making it the only major economy in the world to achieve positive growth last year.

"China's robust recovery will benefit regional trade and investment flows. However, US-China tensions remain intact - not only has there been no lifting of Trump-era trade tariffs, [there are also] sticking points like the human rights issues in Hong Kong and Xinjiang [that] have contributed to tit-for-tat sanctions," Ling said.

Singapore's trade ministry earlier highlighted that geopolitical uncertainty involving major economies could weigh on the global economic recovery. The ministry forecast that GDP growth would come in at a 4.0 to 6.0 per cent range in 2021, a turnaround from the 5.4 per cent contraction last year.

That aside, Lee from Maybank Kim Eng said there were other factors that could affect Singapore's growth outlook. While the vaccination roll-out in Singapore was successful, other countries in the region were still grappling with new waves of infections.

Thailand, for example, was considering tightening restrictions after it recorded over 900 new cases for three consecutive days on Tuesday, with a new daily record of 985 on Monday. For Malaysia and Indonesia, although vaccination has started, the progress was slow, Lee said.

"Regional travel may stay closed for a while. It's very difficult to imagine Singapore allowing borders to freely open by the end of the year when its neighbours are still seeing a big number of cases each day," she said. "This will be a cap for Singapore's recovery if the region continues to underperform."

Meanwhile, the Monetary Authority of Singapore on Wednesday morning said it would maintain its monetary policy.

"As core inflation is expected to stay low this year, MAS assesses that an accommodative policy stance remains appropriate," the central bank said.