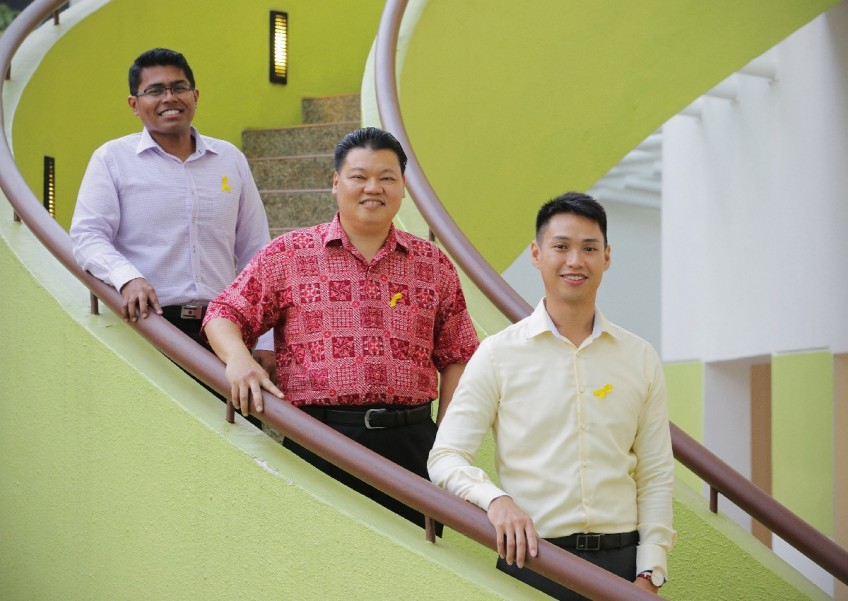 Every Friday evening for the past five years, Mr Tan Han Yao, 34, has been giving maths tuition to inmates taking their O levels at the Tanah Merah Prison.

He has been a source of guidance - both emotionally and academically - to more than 60 students so far.

Yesterday, Mr Tan was one of the 155 individuals who received Long Service Awards at the Singapore Prison Service (SPS) Volunteers Awards Ceremony.

Held at the Grassroots' Club, the ceremony paid tribute to the contributions of individual volunteers and voluntary welfare organisations (VWOs) in the rehabilitation of inmates and former offenders. A total of 35 VWOs were presented with certificates of appreciation.

"These offenders are a part of our society that is often neglected and yet needs help. They are also the most genuine students," said Mr Tan, who hopes to dispel the common misconception that inmates are rowdy and unwilling to learn. "Seeing their earnest desire to study is an inspiration for me. It takes a lot of courage for them to pick up the pen and start learning, and it is something that we often take for granted."

In his speech, Minister in the Prime Minister's Office Masagos Zulkifli praised the work of these volunteers while highlighting how numbers have grown, from about 1,200 volunteers in 2010 to more than 1,700 now.

"Volunteers bridge the gap between in-care and aftercare for offenders and are a symbol of the community's willingness to give offenders a second chance," said Mr Masagos, who is also Second Minister for Home Affairs.

He added that in the coming years, there will be a need for even more volunteers to help former prisoners stay on the right path. While recidivism rates have remained low at about 27 per cent, Mr Masagos cautioned that this could change. "Many inmates who will be released in the next few years are repeat drug offenders who will find it challenging to reintegrate into society for various reasons... Our community partnerships are strong today, but we need to take on a more proactive role in rehabilitation and aftercare," he added.

Also part of this vital support system are volunteers on the SPS' befriending programme, said SPS assistant director of community and family engagement Mohamed Fazly. Over a duration of 16 months, trained volunteers interact with inmates through letters and visits to provide additional emotional support before and after their release.

One of the 270 active volunteers on the programme is Mr Azman Osman, 47, who has been a befriender at the Changi Prison Complex's pre-release centre for the last three years.

"I will listen to their problems and guide them in the many difficulties they face. Some have financial problems and worry about finding a job, while others may be thinking of furthering their studies," said the aircraft technician.