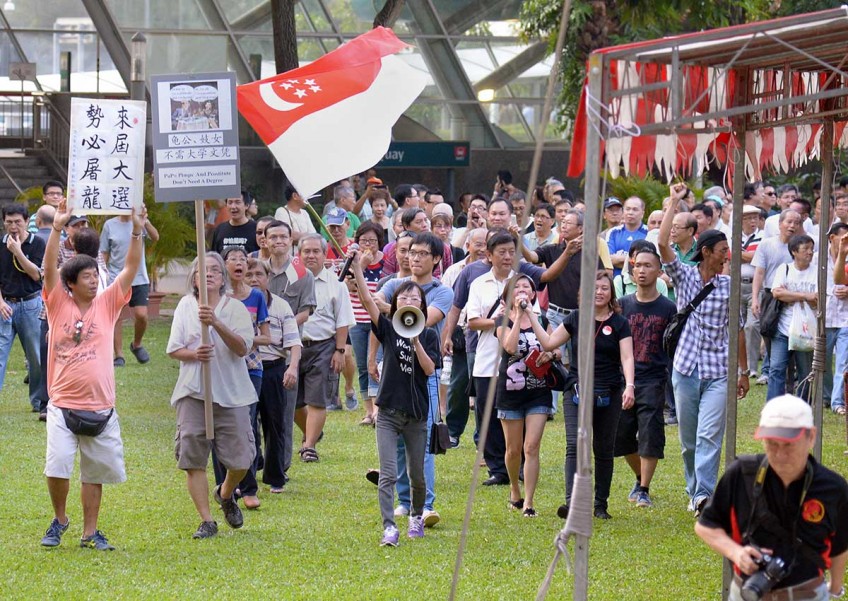 SINGAPORE - The Government has reiterated its reasons for taking action against a group of protesters in Hong Lim Park, after The Economist magazine cited the 2014 case in an article on free speech in Singapore.

The protesters were taken to court for disrupting a charity event and not because they were criticising the authorities, Singapore's High Commissioner to Britain Foo Chi Hsia said in a letter published in the magazine's March 18 issue.

"They were not charged for criticising the Government, but for loutishly barging into a performance by a group of special education-needs children, frightening them and denying them the right to be heard," Ms Foo wrote.

This is the second time in a week that the Government has responded to a foreign publication that wrote about the case.

On Saturday, Reuters news agency wrote that six people "were charged with creating a public nuisance while protesting against a compulsory tax savings scheme".

But the police clarified a day later that their protest had disrupted a charity event at an adjacent lawn. The six, who included blogger Han Hui Hui, were charged for public nuisance with common intention in October 2014, and subsequently convicted.

Last month (Feb 2017), the High Court upheld the conviction and sentence of Han and two others .

In her letter, Ms Foo said The Economist's report in its March 11 edition, titled Grumble And Be Damned, "alleged a lack of free speech in Singapore".

But she noted that Singaporeans have free access to information and the internet, including to international news outlets such as The Economist and the BBC.

"We do not stifle criticism of the government. But we will not allow our judiciary to be denigrated under the cover of free speech, nor will we protect hate or libellous speech," she said.

Opposition politicians have also successfully gone to court to defend their integrity and correct falsehoods purveyed against them, she noted.

"In no country is the right to free speech absolute," she said. "When this right is extended to fake news, defamation or hate speech, society pays a price. Witness the Brexit campaign, and elections in America and Europe."

"Trust in leaders and institutions, including journalists and the media, has been gravely undermined, as have these democracies. In contrast, international polls show that Singaporeans trust their government, judiciary, police and even media," she added.

"Singapore does not claim to be an example for others, but we do ask to be allowed to work out a system that is best for ourselves," she said.