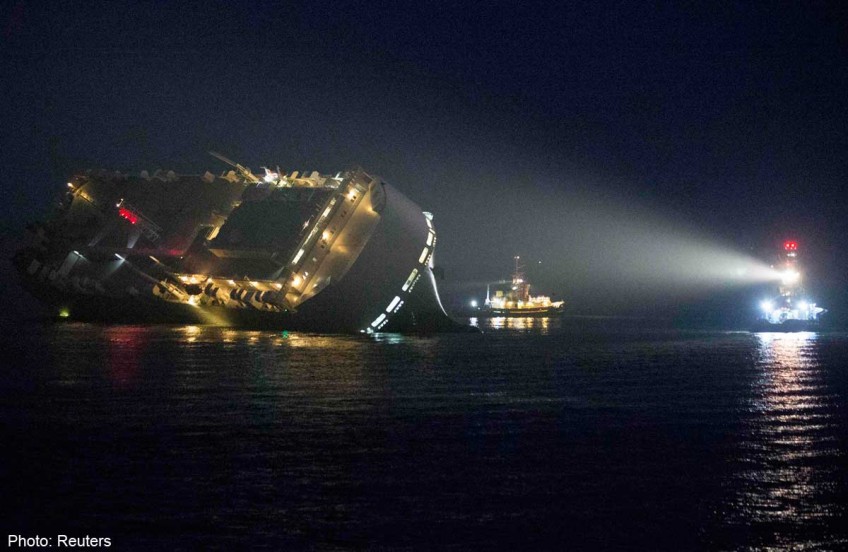 A tug illumnates the cargo ship Hoegh Osaka as it lies on its side after running aground on Saturday evening in the Solent estuary, near Southampton in southern England, January 4, 2015.

SINGAPORE - The captain of a huge cargo ship deliberately ran aground in one of southern England's busiest harbour areas to save the vessel from possibly capsizing, officials said Sunday.

The Hoegh Osaka, bound for Germany with 1,400 cars, beached on the submerged Bramble Bank, a well-marked hazard lying between the major container port of Southampton and access to the open sea beyond the Isle of Wight.

The Singapore-registered, 51,000-tonne vessel was stranded at a 45 degree angle on the sandbank and quickly became a local tourist attraction.

Experts were assessing how to salvage the stricken ship and to minimise environmental impact in the busy waters. The 25 crew aboard the 180-metre ship were safely rescued soon after the drama at about 2130 GMT Saturday by helicopters and lifeboats.

"The crew who were on board the car carrier Hoegh Osaka have all now been accounted for," said the Maritime and Coastguard Agency (MCA).

"Some were airlifted off the ship by coastguard helicopter and others were rescued from the sea by the three lifeboats that were on scene." Despite several injuries, none of the crew's lives were in danger.

Ingar Skiaker, CEO of Hoegh Autoliners, which owns the vessel, said the grounding had been a last resort to avoid worse disaster.

"Our vessel developed a severe list shortly after she left port and the pilot and the master took the decision to save the vessel and its crew by grounding her on the bank. This showed great skill and seamanship on behalf of our crew when faced with such challenging circumstances," he said.

"Right now we have serious work ahead of us in order to free the vessel from the Bramble Bank without disrupting the flow of traffic in and out of the Port of Southampton.

"Our chief concern now is to ensure there is no environmental damage from this incident. There is no oil spill reported at this point however we understand that the UK authorities have brought their spill response to a state of active readiness." Nick Ridehalgh, head of the Associated British Ports in Southampton, told BBC radio that it was "too early" to know what had gone wrong, but that there had been "potential for it to capsize" and that emergency grounding brought the vessel to as "safe a position as possible." The wreck has become a tourist attraction, with people flocking to nearby coasts to witness the unusual sight.

The Bramble Bank is a shallow patch that turns into an island for about an hour at the lowest tides of the year, when local yacht clubs stage a quickfire, jovial cricket match before the sea closes over again.