Singapore is still holding out hope for a travel bubble with Hong Kong, despite previous plans to launch one being foiled at the eleventh hour, the city state's Health Minister Ong Ye Kung said on Wednesday (Nov 24) .

At the Asia Summit on Global Health on Wednesday, Ong sat on stage alongside Hong Kong's Secretary for Food and Health Professor Sophia Chan Siu-chee for a session on building resilient, equitable and effective long-term public health policy. Three other panellists joined in virtually.

Ong said that with Singapore's current infection rates "we find that around the world there are many countries and places where [the] infection level is about the same, so they become possible partners for us to open up to."

The city state is averaging around 1,600 to 2,000 new coronavirus cases each day, although most do not have any or only mild symptoms as 94 per cent of the eligible population is vaccinated.

"We hope that at some point, as we bring our infection down further, our bubble between Hong Kong and Singapore can be realised again," Ong said.

Ong is the first foreign government minister to visit Hong Kong, where 70 per cent of the eligible population is vaccinated, since the start of the pandemic.

He arrived in Hong Kong on Tuesday and This Week in Asia understands that he is on a tightly controlled itinerary, although he will meet with senior Hong Kong officials and Chief Executive Carrie Lam Cheng Yuet-ngor during his trip.

About 70 speakers took part in the health conference either in -person or virtually. The World Health Organisation's chief scientist Dr Soumya Swaminathan, in a video address, spoke about the gaps that remained in Asia in terms of access to epidemic control measures, such as vaccines.

Access to monoclonal antibody, a therapy used to prevent and treat Covid-19, as well as useful for other diseases such as cancer, remained limited in the region.

Ong spoke about Singapore's experience of switching from a zero-Covid policy to incrementally reopening its borders to revive its standing as a trading and aviation hub. It now has quarantine-free travel arrangements for fully vaccinated visitors from 21 places worldwide, including Germany, Switzerland and South Korea.

When Singapore was focused on stamping out Covid-19, it was hard to introduce quarantine-free travel arrangements with other places, Ong said, as "you need both sides to [have] equal risks".

"Unfortunately, bubbles are fragile things and we couldn't start [one with Hong Kong]," he said. An initial attempt to launch a Hong Kong-Singapore bubble in November last year, before mass vaccinations, failed following a rise in cases in the Hong Kong, with a second attempt in May dashed by rising infections in Singapore. 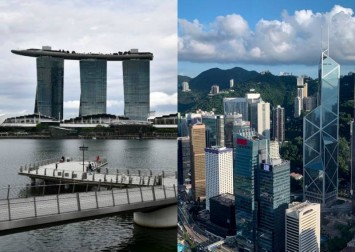 Hong Kong has some of the world's strictest quarantine measures and travel restrictions, with all returning residents required to self-isolate in a hotel room for at least 14 days.

The city's government has sought to align its pandemic measures with Beijing's as it prioritises reopening the border with mainland China, with the two still in talks on when that might happen .

A top-level meeting on the matter will take place in Shenzhen on Thursday, with Hong Kong represented by its Chief Secretary John Lee Ka-chiu. Both sides will iron out details of when quarantine-free travel could start, and the suspension mechanism that will kick in if there is a resurgence of Covid-19.

A source said Lam, the chief executive, had invited foreign envoys in Hong Kong to Government House, the official residence of the city's leader, on Tuesday night for a briefing on the border reopening with the mainland.

Hong Kong confirmed one new imported Covid-19 infection, an eight-year-old girl from South Korea, on Wednesday. The city now has a total of 12,411 cases, with 213 related deaths.