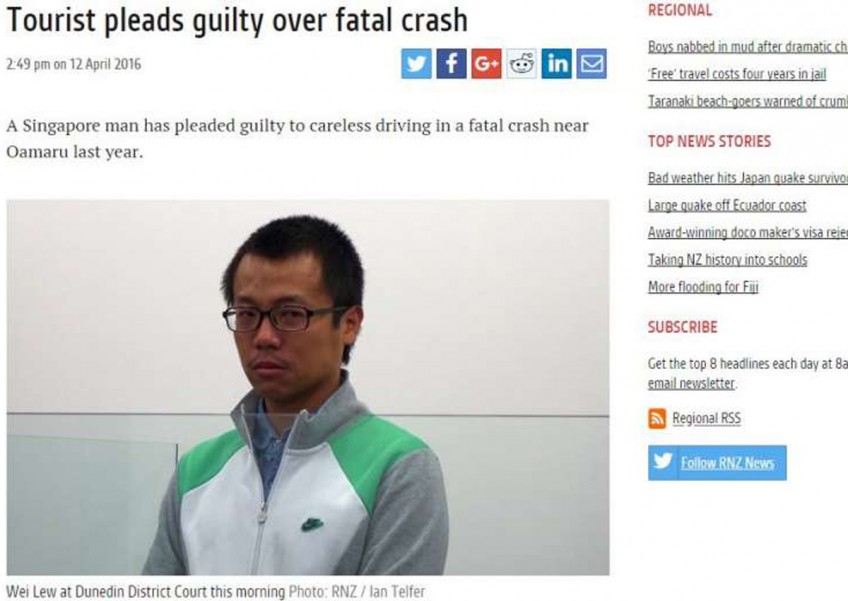 Lew Wei Kiong, 30, was on holiday in New Zealand with colleague Ms Tay Hui Yun in November 2015 when the accident happened.

According to New Zealand media reports, Lew drove a rented Toyota Carolla onto the wrong side of State Highway 1 near Waianakarua and crashed into two oncoming cars and two motorcycles on Nov 29.

39-year-old motorcyclist Craig Alan Chambers died at the scene while Ms Tay was among three others who were seriously injured.

Ms Tay was airlifted to Dunedin Hospital and transferred to Singapore on Dec 19 for further medical treatment.

Stuff.co.nz reported that Lew had been driving at 120km per hour at the time of the crash and did not brake. It added that Mr Chambers' widow cried when she heard this in court.

Lew, a senior analyst at the Energy Market Authority, also reportedly cried in the Dunedin District Court during the reading of the summary of facts on Tuesday (April 12).

He was convicted of all four charges.

Lew is expected to appear for sentencing on June 3.