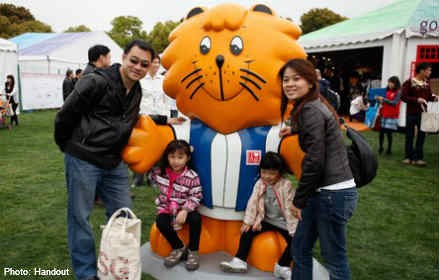 SINGAPORE - Singaporeans living in Australia will get an authentic taste of home this weekend when the Singapore Day carnival goes to cosmopolitan Sydney for the first time.

The event, which is held annually in different cities across the world, is planned and organised according to the interests of the Singaporean demographic in the chosen venue city that year.

In its sixth year, a total of 6,000 Singaporeans are expected to attend the Sydney event held by the Overseas Singaporean Unit (OSU) at the Royal Botanic Gardens.

Themed 'Celebrate Singapore our home', this year's Singapore day will be centred on familiar sights, sounds and tastes found in the Singapore heartland.

From local fare cooked by some of Singapore's most popular hawkers to comedy and musical performances put on by the city-state's most well-known celebrities, Singaporeans in Sydney will feel right at home in a foreign land.

Participants will also get the chance to take photographs in uniquely Singapore settings such as the historic dragon playground in Toa Payoh.

This year's Singapore Day will also feature a special singing contest segment called "The Singer-porean", as well as an event mobile app which includes an interactive map to help direct participants at the venue.

Singaporeans in Sydney have been so excited about the sixth installment of the Singapore Day event that many have volunteered to take part in its making.

One of them, Aaron Peng, a third year law student, will be travelling to Sydney from the University of Tasmania in Hobart just to help out at the event.

He is especially excited about having the chance to eat authentic Singapore fare and meeting other Singaporeans there.

"I'm really looking forward to the looks (and perhaps tears) of joy on fellow Singaporeans' faces this coming Saturday when we reminisce about the joys of being Singaporean together," he said.

Celebrities such as Dick Lee, Olivia Ong, Hossan Leong, Mark Lee, Chua Enlai and Alaric Tay are just some of the stars who will be putting on a concert filled with laughter and nostalgic songs for Singaporeans living in Australia.

Famous hawkers will also be there to serve up some of our foodie nation's most popular dishes such as nasi lemak from Selera Rasa in Adam Road Food Centre, prawn paste chicken from Hong Kong Street Old Chun Kee, Wee Nam Kee chicken rice and many more.