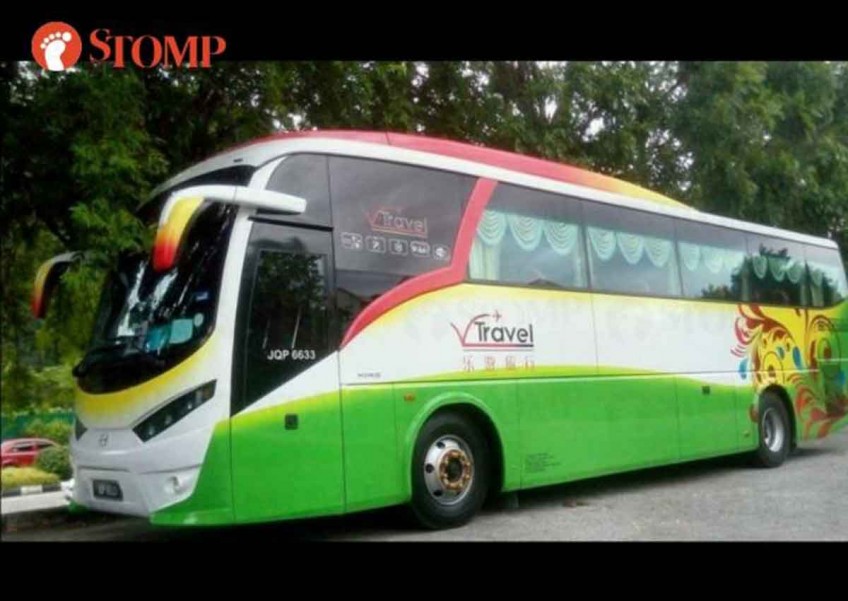 Singaporeans travelling back to Singapore from Kuala Lumpur on Jun 26 were in for a nasty surprise when the bus they were on disappeared at the Johor checkpoint -- with thousands of dollars worth of their belongings.

Stomp contributor Shajahan, one of the travellers, talked to Stomp on the nightmare he experienced.

He also sent Stomp copies of the police reports that he has made in Singapore and Malaysia regarding the incident.

According to Shajahan, he and the tour group had boarded the bus with licence plate number JQV6633 operated by KKKL Travels & Tours from Kuala Lumpur at 5.15pm.

When they reached the Johor checkpoint at 12.15am on Jun 27, the travellers alighted to pass through immigration, leaving most of their luggage in the bus.

However, when they came out expecting to board the bus again to take them to Singapore, it was nowhere to be found.

"We waited for 45 minutes until another bus driver arrived to tell us to board a new bus," said Shajahan.

"That was when we realised that the original bus driver had made off with our valuables and luggage."

Shajahan estimates that he lost $3,000 to $3,500 worth of his belongings as they included his brand new laptop, $800 in cash as well as well as the clothes he had packed.

He said that another man had lost even more as his items included jewellery and gift items including plates and cups.

However, they were also worried that there personal information was taken as well as their valuables.

"Around 10 of us were affected and five of us came forward to make police reports on the Malaysia side as well as in Singapore."

When the Malaysian police tried calling the bus driver of JQV6633 he said that he would drive back but he never did.

"He even told the police officer that there was nothing on the bus," said the Stomp contributor.

Then, the replacement bus left and they had to call other bus operators and pay for another bus to get them back home.

When we were on the way to Singapore from the Johor checkpoint in a new bus, we saw two of another passenger's luggage lying on the side of the bus lane opened and abandoned.

Things did not get any better when Shajahan and a few others of those affected went down to the KKKL Travels & Tours office in Singapore.

"They did not seem to have the time to see us about this nor did they apologise or offer compensation."

"They said that they engaged a third party so they couldn't do anything."

"Needless to say, this was a most unpleasant experience."