Renowned British conservationist Jane Goodall said it was "shocking" that there were Singaporeans who believe wild animals such as snakes belong in a zoo, according to Singapore news website Today.

The 85-year-old, who revolutionised the world's knowledge of chimpanzee behaviour close to 60 years ago, was responding to a question on Tuesday at the Human-Wildlife Co-Existence in Asia: Conflicts and Mitigation Conference 2019 at Marina Bay Sands Expo and Convention Centre.

Robin Hicks, who volunteers at the city state's Animal Concerns Research and Education Society, asked Goodall what Singapore could do about its culture of intolerance towards wildlife.

He gave examples of concerned citizens who have contacted the animal welfare charity in the past to report snakes in parks or tropical birds near leisure centres saying "these animals belong in the zoo".

Goodall said she often learned something new from countries she visited and this was "often something shocking".

She remarked that she was not aware of this thinking that Hicks referred to and found it incongruous, especially at a time when "most of our kids are saying, 'No, they shouldn't be in any zoos. Animals should be in the wild'", according to Today.

She identified education as the key to countering such ways of thinking, saying it was vital "to get children as young as possible out into nature, because once kids get out there, once they see how things grow, once they can watch spiders making a web, then they become absolutely fascinated".

Asked to give her take on cultural "delicacies" such as shark's fin soup, a traditional Chinese dish that is popular in Singapore, Goodall said it would be a "hard one to crack" given the weight of tradition, but added that it again boils down to education.

She said that individuals have the responsibility to not request such dishes, and even make a written complaint if such a dish is offered. 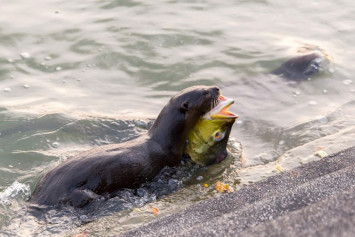 "If everybody did that, it would soon start to change, just as most hotels are beginning to have more vegetarian options," said Goodall, adding that she became an "instant vegetarian" more than 50 years ago after seeing a pork chop on her plate and thinking how it represents fear, pain and death.

The veteran environmentalist was in the city state for a fundraising dinner of the Jane Goodall Institute Singapore, one of 34 she has set up across the world to empower individuals to make a difference for all living things.

In Singapore, the NGO works with schools and communities to increase awareness about conservation of indigenous monkey populations, among other issues.

During the dinner, Goodall revealed in a speech that she continues to travel the world 300 days a year to speak about the threats facing chimpanzees, environmental crises and her reasons for hope in protecting the natural world.

She also demonstrated the hooting cry she would make to the chimpanzees in Africa where she was studying them.

In English, the hoots meant, "This is me. This is Jane", she said, according to Today.