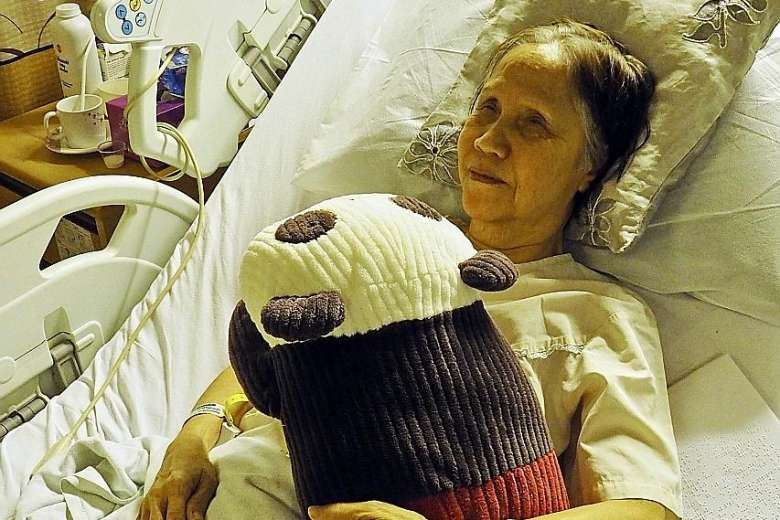 Ms Chan in Singapore General Hospital with her stuffed panda Popo and in the award-winning film Be With Me. Her zest for life had inspired film-maker Eric Khoo.
The Straits Times

Meningitis robbed her of her hearing and her sight when she was in her early teens, leaving her to live in a dark and silent world for nearly 60 years.

The 72-year-old, whose amazing life inspired film-maker Eric Khoo's award-winning movie Be With Me, was diagnosed with advanced lung cancer earlier this month.

She is now in Singapore General Hospital and has been told that the cancer has metastasised.

"There has been pain in my left leg and I've not been feeling very well since January, but I didn't know what I was suffering from until I came here," she told The Sunday Times from her hospital bed.

"But I'm not afraid of cancer.

"If I have to go home, I will be happy to see Jesus. I hope people will remember me and remember that whatever their disabilities, they should have hope and not be unhappy and discouraged," added the devout Catholic, articulating in complete sentences her responses to questions finger-spelled on her hands by an interpreter.

She has no regrets, she said, adding: "I have lived and loved and enjoyed a wonderful life."

The only daughter of a hawker and a waitress, she grew up in Chinatown's Sago Lane, where there were many funeral houses.

She lost her hearing at 12, and her sight at 14, after a bout of meningitis. Her life changed after a social worker found her.

The late John Wilson, who was director of the Royal Commonwealth Society for The Blind, described his encounter with Ms Chan in his 1963 book, Travelling Blind.

He wrote: "She told me she wanted to learn like Helen Keller, to speak English like the Queen of England, to meet everyone in the world.'

It was exactly what she did.

She did not just receive an education. She also played sports and travelled extensively, not just the length and breadth of the US but also other countries including England, Germany, Portugal and Spain.

She met Queen Beatrix in the Netherlands, and the late Mother Teresa while attending mass in a New Delhi church.

She even fell in love, but tragically lost her boyfriend to throat cancer one Christmas morning.

After her return to Singapore in 1973, she taught at the School for the Blind until 1990.

An independent soul who lived on her own and cooked her own meals, her zest for life so inspired Mr Khoo that he made her the spine of his movie Be With Me.

The film, which explores the interconnected lives of several individuals, opened Directors' Fortnight at the Cannes Film Festival in 2005.

Until she was admitted to hospital, Ms Chan stayed in touch with her friends and kept abreast of the news with her BrailleNote, a computer for people with visual disability, donated by the Khoo Foundation.

Her current condition has robbed her of her appetite, but not her wit or her feistiness.

Mr Khoo, who visited her in hospital, said: "She was frank, practical and, in her usual humorous way, told me and my sister not to send her any wreaths when she goes.

"She would prefer that the money go to her church."

He added: "Although she was in discomfort and a bit frail, she was still that tough cookie I met more than a decade ago - strong, brave, one of a kind.

"I really love her laughter."

During this interview, Ms Chan gamely posed for photos with her stuffed panda Popo and grumbled about a social worker who told her recently that she would be taken off public assistance and she needed to use her Central Provident Fund savings.

The septuagenarian, who hopes to be admitted to Assisi Hospice, also told The Sunday Times to put her story on "Book Face".

She has but one wish.