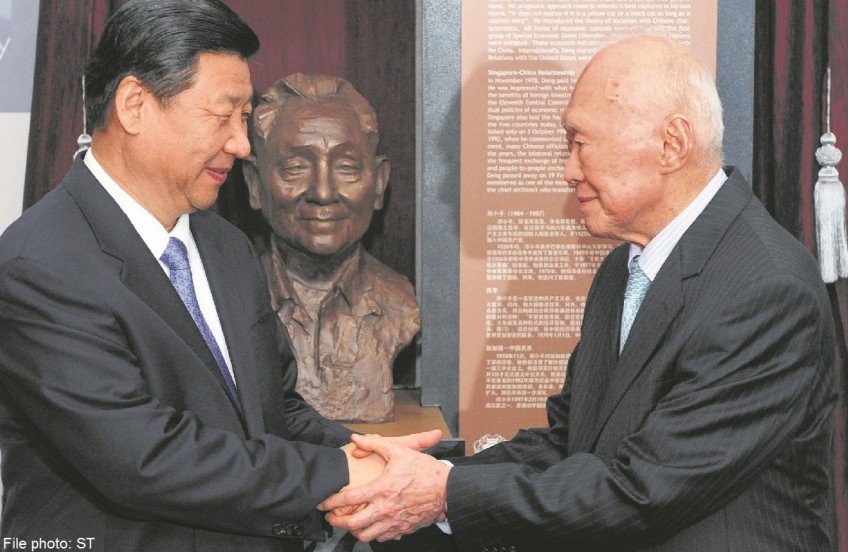 Xi said Lee, who was ethnically Chinese, was "widely respected by the international community as a strategist and a statesman" and expressed "sincere condolences" to his relatives.

Lee met China's leaders multiple times and his model of political control allied to economic growth was seen as an example to China's Communist party as it embarked on reforms.

Lee was the "founder, pioneer and promoter of China-Singapore relations", Xi said in a message sent to Singapore President Tony Tan, China's foreign ministry said on its website.

Ministry spokesman Hong Lei said separately that Lee, who dominated Singaporean politics for more than half a century, was "a strategist boasting oriental values and international vision".

Hong added that Lee was "a uniquely influential statesman in Asia" who made "historic contributions" to Singapore's ties with Beijing.

Lee identified China as a driver of world economic growth early on, and advised leaders of both Beijing and the West on relations.

He praised Chinese leaders several times, including current President Xi, who he wrote was "in the Nelson Mandela class of persons" in a 2013 book.

But he also attempted to alert foreign powers to Beijing's growing ambitions. "It is China's intention to be the greatest power in the world," he said in a book of interviews.

Singapore was ambivalent about China's rising influence in Asia, he added.

"Will an industrialised and strong China be as benign to Southeast Asia as the United States has been since 1945? Singapore is not sure."