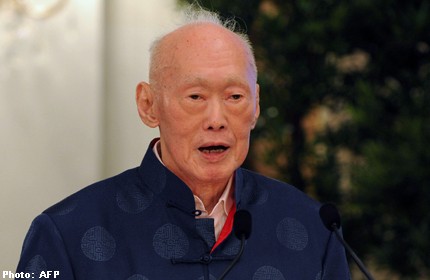 Mr Lee is the only leader in the world that I know of who stepped down of his own accord when he was at the peak of his power.

He had already groomed a second-line leadership, and he stepped down as prime minister to let Mr Goh Chok Tong and his team take over the governance of the nation. Yet he stayed on in the Cabinet so that should any major crisis hit Singapore, he would be around to intervene, if required, to put things right.

Critics often point out that Singapore's phenomenal development cannot be attributed to Mr Lee alone, and much of the credit should go to his old guard colleagues such as Mr Goh Keng Swee, Mr Lim Kim San, Mr Howe Yoon Chong and others.

Mr Lee is no economist. His comrades and consultants like Dutch economist Albert Winsemius probably provided the framework and input for Singapore's early industrialisation and subsequent economic development.

Though his colleagues may have been the "brains", the "executioner" of the plans was clearly Mr Lee.

Under the Land Acquisition Act, he acquired acres of pig, poultry and vegetable farms, fish ponds and fruit tree plantations for a pittance - all for national development. He did the same with private lands and houses in critical areas. He took a big political risk in undertaking these measures and he succeeded.

His guts and gumption were manifested in the political sphere as well when he took on and defeated his formidable left-wing rivals and their political outfit, the Barisan Sosialis.

Only Mr Lee could have shut down Nanyang University and subsequently converted it to a second university. If English is now the first language for most Singaporeans, the credit should go to Mr Lee, who pushed for it more than anyone else.

In all honesty and with due respect, I don't think Singapore would have achieved all it did if the People's Action Party had been led by someone else.

For people of my generation, Mr Lee is indeed the "special one", and I am a retiree with no attachment to any political party.