Singing baker-brothers to perform in NDP 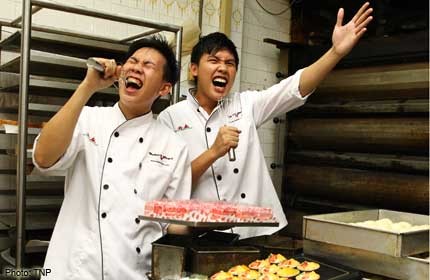 The Baker Brothers: Mr Zach Leong (left), 34, and Mr Deon Leong, 26, who bake and sing together, will be part of Sing A Nation to sing this year's National Day Parade theme song.

SINGAPORE - These brothers bake and sing in their neighbourhood bakery along Tampines Street 91. But on Aug 9, they will have the National Day Parade as their stage, with more than 15,000 people in the audience.

Mr Zach Leong , 34, and his brother, Mr Deon Leong, 26, are known as The Baker Brothers. They are two of the 68 choir members who make up Sing A Nation.

The choir has been broken up into 10 groups, which are now fighting it out in a reality TV-style show, titled Sing A Nation, to decide the lead singing group during the NDP.

And the duo are "ecstatic" to be a part of it.

The younger Mr Leong, who has been baking for six years, said: "We never expected to get accepted. We were screaming all the way back in the car."

But it took some persuasion and a friendly challenge to get the brothers interested.

His older brother, who is married with two sons, said his wife had asked him to try it out and then his son asked:

"Now we have made it, I think it's a good testimony for my son... That things can really come true if you try."

The brothers, who have been burning their weekends for rehearsals and video shoots, said they enjoy the time spent with the ensemble choir.

The older Mr Leong said: "Every time we gather for rehearsals, it's like show time. I think we really click, the 68 of us."

While the two brothers, who describe each other as best friends, are in the limelight, an unsung hero supports them back in the bakery.

Their brother, Mr Joey Leong, 32, is holding the fort and motivating them with his sacrifice.

Mr Deon Leong said: "Joey also sings, but he told us to go ahead and do our best so we don't waste his efforts. He is now doing two men's work."

He also revealed how his mother garnered support from their friends to watch their shows.

But baking remains firmly in the brothers' plans.

Mr Zach Leong said: "We are very happy to be a part of this history-making choir. But we live to bake and bake to live. We hope to bring this through a new generation of Baker Brothers."