Single father of 3 kids unable to work after getting cancer 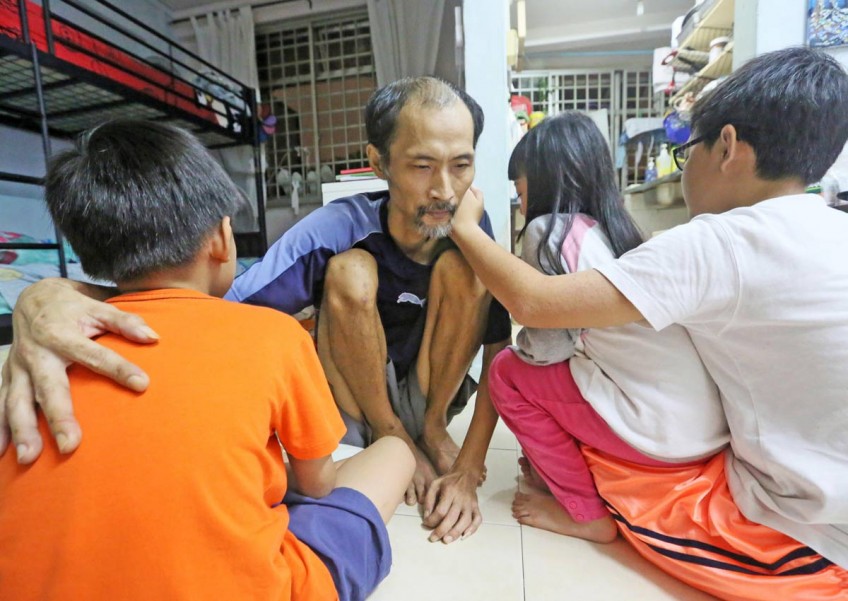 First his business failed, then his wife abandoned him with three kids and now, Mr Wu Yunchong has been struck with esophageal cancer, reported Shin Min Daily.

Mr Wu, 44, met his wife over 10 years ago at a friend's wedding. At that time, he was also trying his hand at a garment business with his friend.

He had to sell his three-room flat to clear the debts and ended up moving into a rental flat with his Vietnamese wife and family, according to Shin Min Daily.

Unable to take the hardship, his wife abandoned him with three young children. To support the family, Mr Wu took on two jobs.

"I started working as a cleaner," he told the Chinese daily, "and I would bring the kids to school and fetch them home after." His sons are now 13 and 10 years old, and his daughter is seven.

After doing the housework and tucking the children in bed, he will head for his second job as a dishwasher. He earned about $1,000.

Mr Wu revealed that he found a high-paying cleaner job three years ago. He thought the job could turn his life around, but this year, he found out in May that he has cancer.

"At first, the doctor thought I had acid reflux and gave me pills to take. After three months, I didn't feel better so I went to see a specialist and found out it was esophageal cancer," he said in the Shin Min Daily report.

"I nearly collapsed when I found out as I was worried about my kids' future," he added.

After the diagnosis, Mr Wu said the tumour was about 4.5cm in size and he was scheduled for surgery in October. His weight dropped from 63kg to 51kg.

Now, he is unable to do the operation as he is underweight.

He has already had 26 treatments of chemotherapy and four radiotherapy sessions. The costs are deducted from Medisave and his savings are nearly exhausted, reported Shin Min Daily.

When his kids were informed of his illness, they got so worried and started to cry.

Mr Wu said he tried to cover up his illness but his second son kept on asking him questions and eventually found out the truth.

When interviewed by Shin Min Daily, the second son said he was really afraid of losing his father.

Mr Wu said he receives $1,000 of financial assistance but insists on not using the money for his medical bills. He wants the money to be used for his kids' well-being.

In July, he applied for assistance to support his family. His 10-year-old son even saves up his $2 pocket money to keep for his family's expenses, but Mr Wu refuses to accept it.

He makes sure every dinner has one vegetable and one meat, and that his kids get adequate nutrition.

Ministry of Social and Family Development said they have been providing financial assistance to Mr Wu since 2012 and the amount has been increased in July 2015.

He also received funds for his medical bills and his children are also aided by the Ministry of Education.

AsiaOne has received an overwhelming response from people who wish to help Mr Wu and his family. Many have offered donations and to foot his medical bills, send groceries to his home, provide tuition for kids and bring them out for meals.