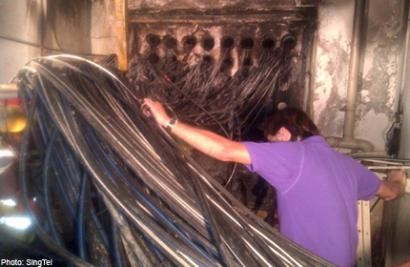 SINGAPORE - The fire may have been put out days ago, but many subscribers who rely on SingTel's Internet infrastructure were still experiencing connection issues yesterday.

Sales consultant Winnie Woo told The Sunday Times that the broadband service and land line at her Woodlands home were still down as of 7pm.

"I am very annoyed," said the SingTel customer, who had to resort to using her mobile phone's 4G service to surf the Internet.

A fire at SingTel's Bukit Panjang Internet Exchange building on Wednesday led to mass disruptions for both consumer and business subscribers of at least six Internet service providers here.

Two-thirds of the 149 fibre optic cables damaged by the fire belong to OpenNet, the builder of Singapore's ultra-fast national fibre broadband network.

OpenNet said on Friday that it had restored all of its damaged cables.

SingTel, in a update yesterday, said all its ADSL services affected by the fire have been restored but "a small number" of fibre cables still needed to be rectified.

The assurances from SingTel and OpenNet, however, could not appease subscribers who continued to take to the Internet to air their unhappiness.

Mr Henry Teo posted on The Straits Times Facebook page, asking how SingTel was going to compensate its customers for the inconvenience caused, while others like Ms Lucy Au complained of slow Internet connection.

Not all subscribe directly to SingTel's services, although other Internet service providers like StarHub and M1 were disrupted as they buy fibre links wholesale from OpenNet.

As of 7pm yesterday, more than 400 StarHub customers in Bukit Panjang, Choa Chu Kang and Woodlands still had problems with their fibre broadband connections, she added.

M1 said on Facebook at 11pm last night that its customers were still experiencing problems with their fibre broadband service.

StarHub fired another salvo when it said that a joint investigation by OpenNet and StarHub subsidiary Nucleus Connect at the Bukit Panjang site on Friday night "found some faulty components which OpenNet subsequently replaced".

When asked for comments, OpenNet stood by its Friday statement and declined to comment further.

But in an effort to appease its customers, SingTel said it is dispatching mobile broadband dongles to those who subscribe to fibre broadband services only.

It will also install ADSL broadband for mioTV, mioVoice and Internet customers, a spokesman said.