Sister Act actress couldn't speak English before she moved to US

Mary-Ann Soh and May Ong
AsiaOne

She did not speak a word of English when she first arrived in New York in 2011.

But with lots of tears and sweat, Korean actress Sophie Kim picked up the language and finally got her biggest break yet when she landed a role in the cast of the musical Sister Act, which opens in Singapore today.

Kim, who looks just like a K-pop star, told AsiaOne that being in the cast of Sister Act is like a dream come true for her.

The 36-year-old is the first Asian to be cast in the role of Sister Mary Robert in the American production, which is an adaptation of the 1992 comedy that Whoopi Goldberg is famous for.

Born Kim So Hyang, she grew up in a theatre district in Seoul, Korea and her mother often took her to shows when she was young. Her desire to sing and act began there.

While in Korea, Kim performed in many shows such as "Mamma Mia", "Dreamgirls" and "West Side Story".

But that stage was not big enough for her.

Kim shared that she felt empty after acting for 10 years locally and needed to learn more - even if it meant starting all over again.

So she took a big leap of faith, moved to the US and enrolled herself in the New York Film Academy.

Her move to New York was not an easy one. Language was a huge hurdle for her as she did not know any English. Learning to sing and act in a foreign language was even more arduous.

When asked about how she coped with the stress of handling the new language and her new life there, Kim recalled, "I cried a lot. I cried every single day."

To catch up on her classes, Kim woke up at 6am every day to memorise lyrics, lines and monologues, and became a "theatre nerd", she joked.

Mary Robert is just like me in the US. I obeyed what people told me is right to do. But like her in the show, I am gaining confidence and becoming braver in the US.

Apart from studying and performing, Kim also hit the gym every morning to warm up her body and vocals, which has become a crucial part of her daily routine up till now.

And her hard work is paying off.

When casting calls for the Broadway production opened, Kim knew she wanted to audition for the role of Mary Robert but wasn't sure since there are no roles for Asians in the play. But it was her agent who egged her on to try it out since it was an Asian tour, so she did and the rest is history.

"Mary Robert has been my dream since forever," the actress said with wide-eyed wonder.

She shared that she knew she wanted to be a part of Sister Act after watching it for the first time. 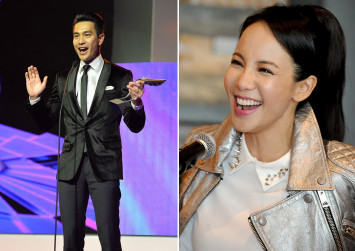 "As soon as I saw it (Sister Act), I really want to be a part (of it). I went for a lot of auditions for this role, but the role has never been taken by Asian before. That's why it's a really big dream for me."

Fans of the nun-on-the-run comedy can look forward to seeing the first Asian face on stage. Kim's character, Mary Robert, does not argue, yell or fight with anyone but after meeting main character Deloris, she breaks out of her shell and discovers her true self, standing up for what she believes in.

"Mary Robert is just like me in the US. I obeyed what people told me is right to do. But like her in the show, I am gaining confidence and becoming braver in the US," said Kim.

As the only Asian in the cast, she will probably stand out or be so convincing that she might blend right into character.

Either way, with such an affinity for Mary Robert, Sophie Kim might just convert you.