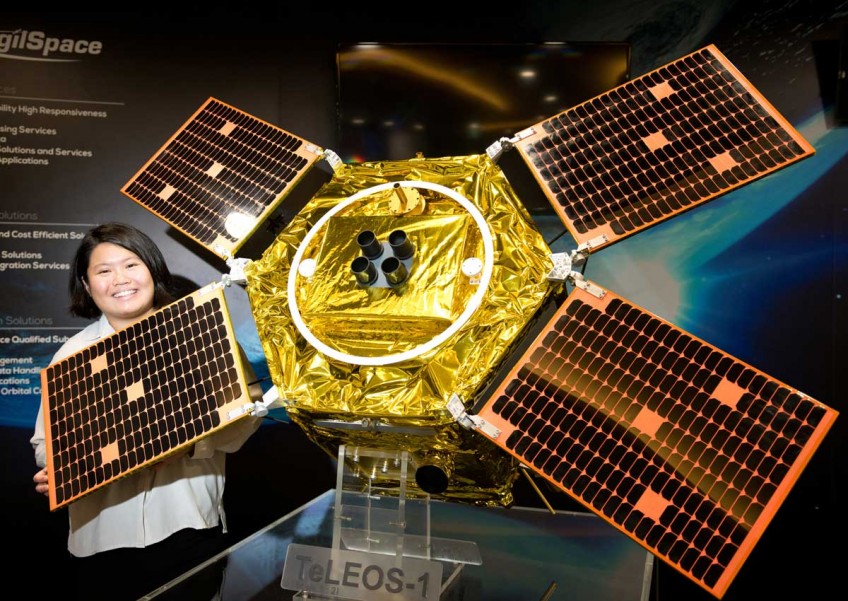 In this photograph taken in 2014, Ms Grace Parn, senior engineer with ST Electronics (Satellite Systems) poses with a model of the TeLEOS-1 satellite.
The Straits Times

Singapore is taking its boldest leap yet into space when it launches six locally made satellites in December. Among them is a 400kg satellite that can conduct surveillance missions for maritime and border security.

The satellites will ride on the Indian Space Research Organisation's Polar Satellite Launch Vehicle (PSLV-C29) rocket that will blast off from the Satish Dhawan Space Centre in Andhra Pradesh, India.

The six satellites will then hover about 550km above ground for up to five years.

The Dec 16 launch comes four years after the Republic put its first home-grown micro-satellite in space. Since the launch of the fridge-size X-Sat in 2011, smaller satellites have subsequently been launched by Nanyang Technological University (NTU).

This time round, the satellites are being built from scratch by teams from defence manufacturer Singapore Technologies Electronics (ST Electronics), National University of Singapore and NTU.

The biggest is the 400kg TeLEOS-1 - the first Singapore-made commercial earth observation satellite to orbit in space, said ST Electronics communication and sensor systems group president Tang Kum Chuen. The satellite will carry a camera that can take pictures at ground resolution of up to 1m.

Mr Tang said the TeLEOS-1, expected to last up to five years, will also be able to conduct missions such as disaster monitoring, coastal surveillance, urban planning and homeland security. The other smaller satellites, designed and built by NUS and NTU, will last from between six months and three years.

NTU, which has put four satellites in space, will add three more at the end of the year to monitor tropical climate and test experimental satellite-based communication.

Besides Singapore, the other countries in the region that have their own satellites in space include Indonesia, Thailand and Malaysia.

Dr Tim Huxley, executive director of the International Institute for Strategic Studies (Asia), said the upcoming satellite launch is a "significant step" in Singapore's space programme, which started 20 years ago. "Singapore recognises the importance of using space technology for all sorts of purposes, from tracking maritime traffic or finding forest fires, to military purposes to know what regional countries are doing on land, air and sea."