A small minority of Singapore ’s residents are sowing racism against local and expatriate Indians in the same manner as the discrimination being imposed on Asian people in the United States, the city state’s law and home affairs minister K. Shanmugam warned on Tuesday (May 11).

Police said on Tuesday that a 30-year-old man had been arrested in relation to the incident for being a public nuisance, “uttering words with intent to wound the racial feeling of others” and voluntarily causing hurt.

Acts of violence linked to racism are rare in the multi-ethnic country, which for decades has wielded tough laws to keep the social peace following bloody racial riots in the 1960s.

Antipathy towards Indian nationals, however, has been on an uptick, particularly due to a perception that the Comprehensive Economic Cooperation Agreement (CECA), a free-trade agreement between the republic and the South Asian nation, was fuelling an influx of new arrivals who are stealing locals’ jobs.

The government has repeatedly denied this was the case.

Shanmugam told lawmakers that while investigations are ongoing over the incident involving 55-year-old Hindocha Nita Vishnubhai, her account suggested the conduct of the attacker – a Chinese man – was “consistent” with the uptick of racism around the world during the Covid-19 pandemic.

In the US, Asians – particularly people of Chinese descent – have faced bigotry from others who viewed the Covid-19 disease as a “Chinese virus”.

Singapore condemned the attacks against Chinese people in the US and “equally we have to condemn such behaviour in Singapore”, Shanmugam said.

“The majority of Singaporeans are decent and not racist, but if we continue to fan the flames of racism, we will get to a more uncomfortable position,” he said.

On Monday night, Prime Minister Lee said on Facebook that “he was disappointed and seriously concerned that this racist attack could happen in Singapore”.

He said stress arising out of the Covid-19 pandemic and anxiety about jobs and families did not justify racist attitudes and actions, or assaulting someone “because she belongs to a particular race, in this case Indian”.

Vishnubhai, a Singaporean of Indian descent, was brisk-walking on Friday morning when she was approached by a man who appeared agitated that she had pulled her mask down from her nose and mouth.

Local Covid-19 rules allow for the removal of the face mask during outdoor exercises. 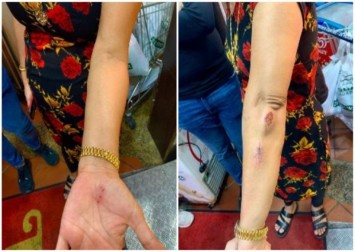 Wanting to avoid a confrontation, Vishnubhai told the man “God bless you” and walked away, according to her account reported in The Straits Times.

The man reacted by running towards her and landing what she described as a “flying kick”. Vishnubhai suffered scratches on her arms and hands because of the fall, and reported the incident to the police later in the day.

In his remarks, Shanmugam stressed that while “there has always been racism in Singapore”, the problem had been managed and “over time we have sought to reduce it”.

But like elsewhere in the world, some individuals were taking advantage of economic insecurity in the midst of the Covid-19 pandemic and “deliberately stoking the fears, encouraging racism and xenophobia and dog-whistling much like we have seen in the US”, the minister said.

“That is dangerous and dangerous for Singapore … first it will be expat Indians, then it will come to Singaporean-Indians. And anyway not everyone can distinguish between foreign-born Indians and Singapore-born Indians,” Shanmugam said, adding that Vishnubhai – who he did not name – had been a Singapore citizen for 25 years.

“If we go down this route, eventually all Indians can be a target of hate,” he said. The minister noted that there were comments on local anti-government websites that were deliberately stoking racist sentiments, with “Indians being called cockroaches and rapists and so on”.

He said it was untenable to justify such racism as being rooted in government policy, or in CECA, adding that “there have been several canards about CECA promoted by a whispering campaign”.

Shanmugam’s comments were in response to a question posed by Member of Parliament Murali Pillai, who asked the minister for his assessment of the security situation arising from such racial incidents.

Another MP who touched on the topic was Tin Pei Ling, who had asked the government about its preparedness against racist and anti-social sentiments, given anti-Asian hate crimes overseas.﻿

“We are such an open society receiving news and info from all over. I don’t want the hard-earned harmony here to be affected,” Tin told This Week in Asia. 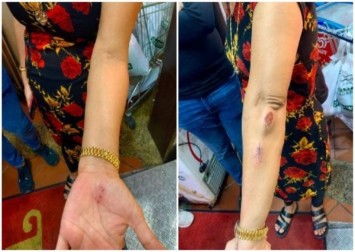 A video posted online showed a man verbally abusing the family, asking the husband if he had served the two years of military service required by all Singaporean men.

The wife told local media that the man had also told them to “go back, bloody Indians”, although that was not captured in the video.

Sociologist Laavanya Kathiravelu from Singapore’s Nanyang Technological University said the strains of the pandemic had likely brought “simmering issues” surrounding race and nationality to the surface.

Tan Ern Ser, a sociologist with the National University of Singapore, said the current catastrophic second wave of Covid-19 infections in India – with the sprouting of a virus strain first discovered in India that many refer to as the “Indian variant” – served “as a catalyst which precipitates racist attacks, or provides an excuse for covert racists to express their racism”.

Singapore has a population of 5.7 million people, of whom 4.04 million are citizens or permanent residents.