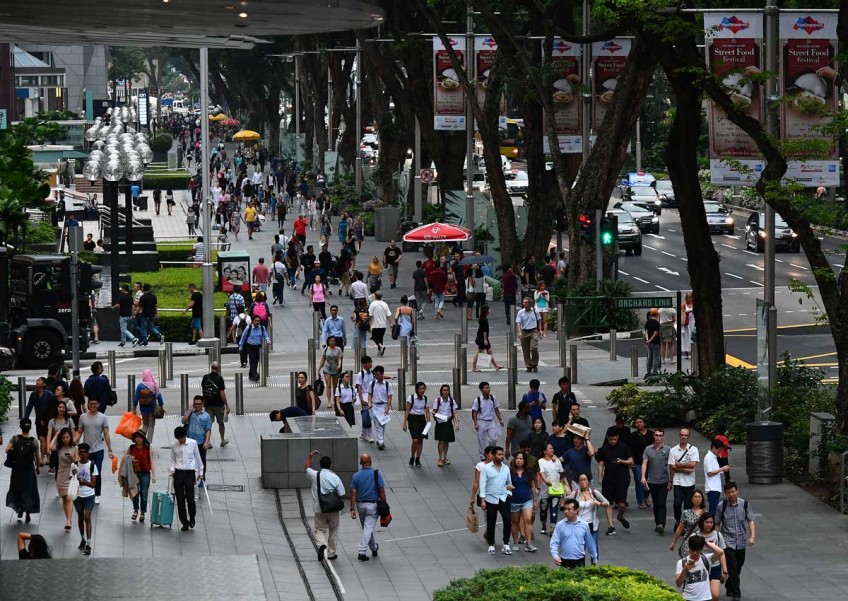 Come July 1 next year, smokers will no longer be able to light up as they wish along Singapore's main shopping belt of Orchard Road, which will be designated a 'smoke-free zone'.

The National Environment Agency announced on Friday (June 30) that the smoking ban in Orchard will extend from Tanglin Road to Dhoby Ghaut station, and from Scotts Road up to Goodwood Park Hotel, except at designated smoking areas (DSAs).

Smoking corners within food establishments in the Orchard Road area will also be removed by July 1. However, malls and building owners are free to set up designated smoking areas (DSAs) if they wish to do so.

There are currently five government-owned DSAs at Orchard. They are located at Cuppage Terrace, Far East Plaza, Orchard Towers, The Heeren, and behind Somerset MRT station.

Said Mr Derek Ho, director-general of its Environmental Public Health Division: "The progressive roll-out of the ban, as well as designating the designating smoking areas is to allow smokers the space to continue to smoke, but at the same time also separate and protect the non-smoking public from second-hand smoke.

"It's part of our long-term vision that eventually, all public spaces will be smoke-free except for the designated smoking areas. So what we're doing now is a progressive step forward."

According to NEA, warnings will be given to those who flout the no-smoking rules in the first three months of enforcement, but warned that from Oct 1 next year, smokers who do so are liable to be fined up to $1,000.

In addition to the smoking ban, from today, NEA will also no longer be accepting new smoking corner applications from food establishments and retailers island-wide. Existing smoking corners in food shops can continue to operate, until the existing licence is cancelled or terminated, said Mr Ho.

NEA will continue to engage the various stakeholders during this one-year period to ensure that "no smoking" signs are installed at the affected premises and roads in the Orchard area, and that bins with ashtrays will be replaced with those without.

Bins placed along the main thoroughfare will also carry messages reminding people that the area is a smoke-free zone.