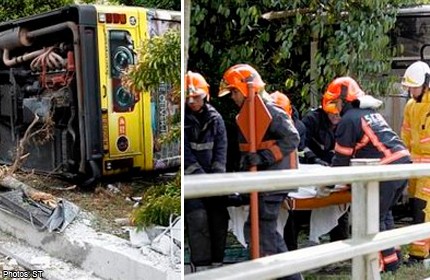 SINGAPORE - Transport operator SMRT said that the driver involved in the early morning crash along Dairy Farm Road on Sunday and the injured passenger are in stable condition.

Both were sent to National University Hospital (NUH) after the accident.

SMRT has also said that the 39-year-old driver has been with the company since January 2012. He has a clean driving record with no prior accidents nor complaints against him. He was not named.

The driver has been driving service 700 since July 2012, and he was last at work on and 8 and a half hour shift on 20 July.  He began his driving shift at 7am this morning.

SMRT also said in the same statement that the bus involved in the accident was last maintained on June 21 and given a clean bill of health. No brake and steering related problems were noted during the inspection.

The dead male passenger is understood to be 19-years-old. He was trapped in the bus and pronounced dead on the scene.