Spoof it, mock it, but council says ad works 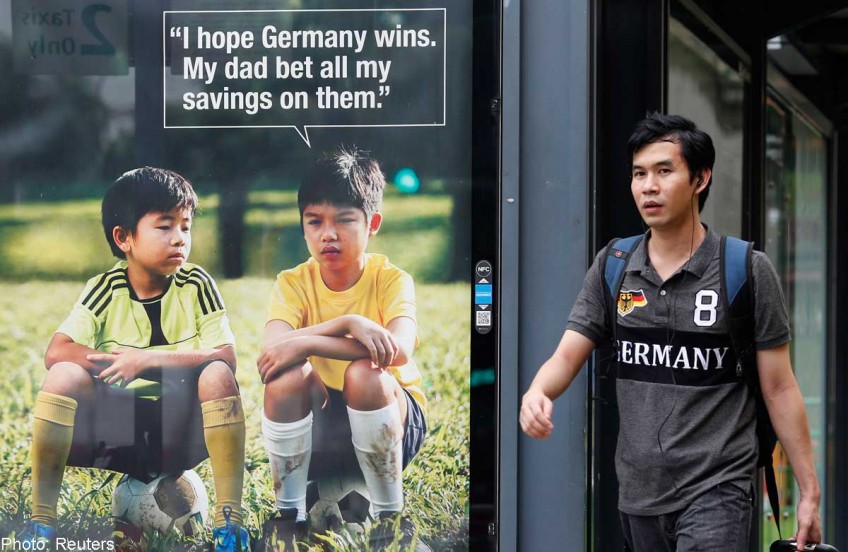 A man walks past a World Cup anti-gambling advertisement at a taxi stand in Singapore.

The World Cup advertisement by the National Council on Problem Gambling (NCPG) may have been spoofed around the world, but the council believes it has done its job.

NCPG said its 24-hour helpline received 105 problem gambling-related calls a day after the World Cup final on July 14. This was twice the average and the highest for a single day.

There was also a 20 per cent increase in the number of requests for counselling services last month, compared to May.

Said NCPG chairman Lim Hock San: "Despite the memes and jokes, we believe that the audience understood our message. They are now aware of NCPG and who to call if they encounter issues of problem gambling."

The ad, which was shown during the live telecast of the matches here and displayed on the NCPG website, features a boy named Andy, who sadly tells his friends that all of his savings were used by his father to bet on Germany.

But it started to be lampooned after Germany's 7-1 semi-final thrashing of host Brazil.

American talk-show host Jimmy Fallon joked about it on The Tonight Show.

It was also featured in reports by the international media, including US newspaper The Wall Street Journal, British newspaper The Guardian and wire agency Reuters. This became worse when Germany went on to win the World Cup, after beating Argentina 1-0.

Still, media and public relations experts believe that while the attention may have been for the wrong reasons, that was not a bad thing.

"Although many laughed about it, the reality is that the ad created conversations about gambling, which would not have taken place otherwise," said managing director of Asia PR Werkz Cho Pei Lin.

Mr Tarun Deo, the managing director of public relations firm Golin, added: "The fact that people noticed it, debated it and that it was even converted into a parody shows that it has been very successful in terms of getting noticed."

A modified version of the online ad was shown on the NCPG website after Germany's final win, in which Andy's friend asks him if he got his savings back.

The boy replies: "No, dad never stops... He wants to bet one more time."

Mr Lim said: "We saw an opportunity to reinforce the message that win or lose, problem gamblers are unable to stop."

The ad was created by a team of four from advertising agency Goodfellas.

Its founder Patrick Low, 59, did not want to comment on the impact of the Andy ad, but said: "Like most people, we are football fans... We were inspired by the ad of the little girl with the piggy bank, from the first NCPG campaign."

Ms Chong See Mun, senior social worker at Hougang Sheng Hong Family Service Centre, admitted some gamblers do not even give their children much pocket money to begin with.

But she said the ad reflects what happens in real life.

Mr Dick Lum, executive director of One Hope Centre, added: "People may laugh about it, but gambling is a real problem. Gambling affects the gamblers' families too, because the gamblers take every opportunity to use whatever money the family members have...

"The second ad was also important in showing that, win or lose, gambling is addictive."