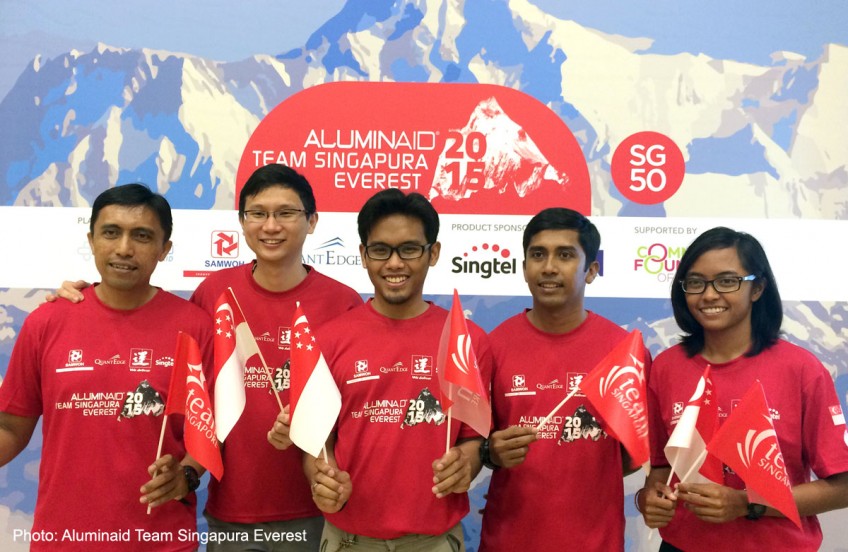 Four Singaporeans have set the bar high when it comes to celebrating Singapore's 50th birthday - more than 8,800m high in fact.

Three men and a woman, all outdoor enthusiasts, have set their sights on conquering Mount Everest, the world's highest peak.

They will set off for Everest Base Camp tomorrow, and plan to scale the summit between May 28 and 29.

They have been gearing up for the mission since 2010, when four members of the original team - Ms Yusrina and three friends - hit on the idea of flying the Singapore flag on Mount Everest.

The team took out advertisements in newspapers and recruited 20 members in the same year.

But five years later, most of the members have dropped out, citing financial difficulties and a lack of time.

Training took place thrice a week and involved the climbing of stairs and gym training in a simulated low-oxygen environment. The group has scaled other peaks, including Mount Shiti Dhar in India (5,251m) and Cho Oyu in Nepal (8,201m).

"We're ordinary Singaporeans trying to scale the world's highest mountain," said Ms Yusrina, who is co-leader and teaches at Temasek Primary School. "We're doing this to inspire fellow Singaporeans, that if you set your mind to it, you can do anything."

The team was self-funded before Aluminaid, a medical device company, came on board last April. "Finding sponsors to support our cause was like scaling a mountain of its own," said Mr Yeo, 26, a recent Singapore Management University graduate.

If they succeed, they will join at least two other Singapore groups that have scaled Everest.

The team's other co-leader, Mr Muhd Hilwan, 29, was supposed to go to Everest too, but the programmer suffered a minor stroke while scaling Cho Oyu last year.

"I won't be with the team physically, but I will be rooting for them back home and updating our Facebook page," he said.