S'pore must learn from China's drive to improve: PM 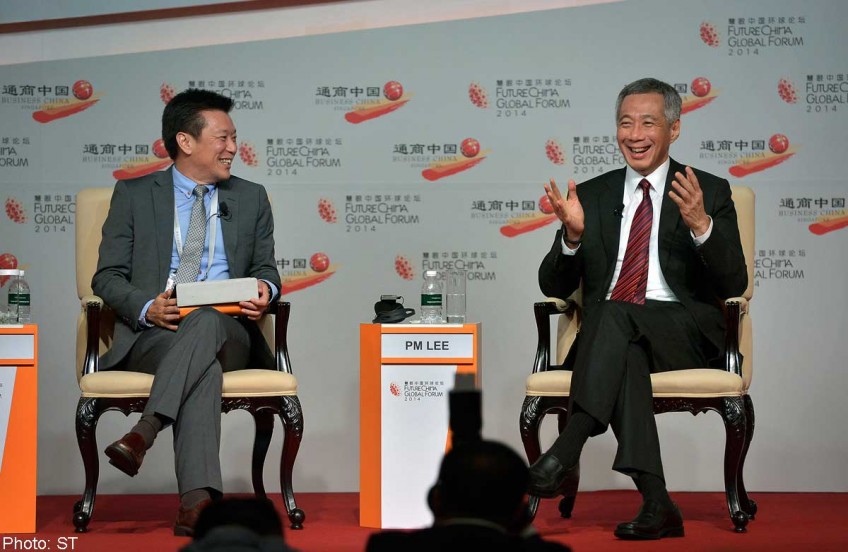 As Singapore enters a new phase of development, it can learn from China in keeping its drive and zeal to improve, said Prime Minister Lee Hsien Loong yesterday.

He said this after observing how Chinese officials at every level of government, from city mayors to the top bureaucrats in Beijing, "all want to do better... and move the country ahead".

"However developed you may be, you must have that drive in order to push forward and achieve something different, and to feel that at the end of the day, you have done something and it's more than what my ancestors have handed to me," he said.

"That is what China has done in (the) last 30 to 40 years since reforms started and that is what Singapore needs in our next phase of development."

PM Lee was answering questions at a dialogue at the FutureChina Global Forum at the Shangri-La Hotel, at which he spoke mainly in Mandarin. A participant had asked him what Singapore, which he called one of the world's greatest developed countries, could learn from China.

The other thing that Singapore can learn, PM Lee said, is China's "great thirst for knowledge" in dealing with its challenges.

In the hour-long dialogue, moderated by Chinese daily Lianhe Zaobao editor Goh Sin Teck, PM Lee also discussed the strength of Singapore's relations with China, and developments in the region.

The two countries have a Joint Council for Bilateral Cooperation, he noted, and ties have developed, from the Suzhou Industrial Park to the Tianjin Eco-city, and collaborative projects between Singapore and Chinese firms.

Over the next five years, there will also be potential challenges but he said he was confident that China's development will continue "on an upward trajectory".

He is also confident that China's domestic reforms will go ahead, its integration with the global system will deepen and it will have mutually beneficial and friendly ties with other countries.

Going forward, he said that one area in which both countries can deepen cooperation is in social management, as China's society is fast urbanising and changing in the same way Singapore is.

Turning to regional developments, PM Lee said it was "ridiculous" to think that the ambitious Trans-Pacific Partnership (TPP) free trade agreement among the US, Singapore and countries in the region is to "contain" China, as one participant had asked.

"I see no reason why the Chinese should think that the TPP will contain them because all the TPP partners in Asia actually have an enormous volume of trade with China," he said. Not only is China Singapore's biggest trading partner, but it is also Australia's and Japan's, he noted.

Having such regional FTAs is a "second-best" option compared with having a deal across all countries, but he said he hopes "the patchwork knits together".

While China - which is pushing for another FTA in the Regional Comprehensive Economic Partnership that does not include the US - may not be considering joining the TPP now, it is looking at it carefully and has not ruled out any options, PM Lee said. "If I were (Chinese President) Xi Jinping, between TPP and RCEP, I would pay attention to both."