S'pore to stay cool and wet this month 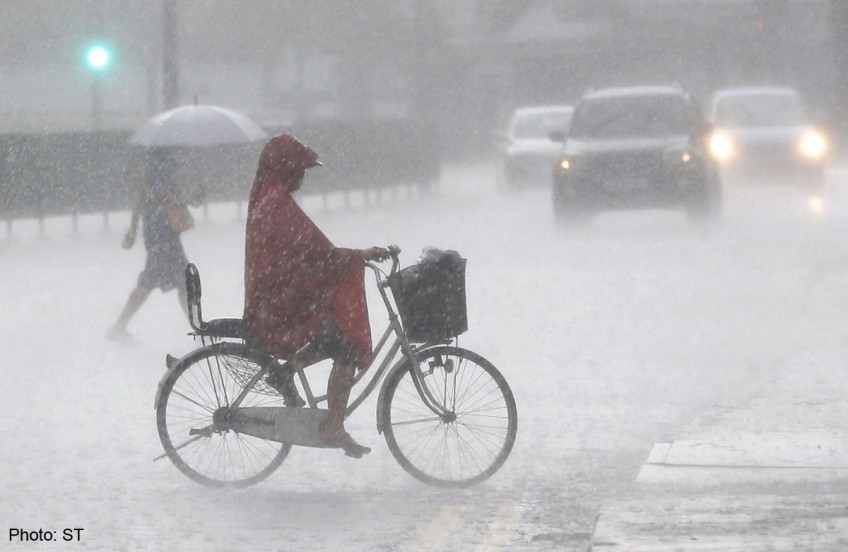 A pedestrian and a cyclist braving the rain in Toa Payoh.

SINGAPORE - The cool, rainy weather here is expected to continue until the end of the month, before the cloudy skies clear up next month - just in time for the Chinese New Year.

There will be "a few rainy episodes" this month, but these are conditions typical of the north-east monsoon, according to the Meteorological Service Singapore (MSS).

Total rainfall for the month is expected to be about 242mm, the long-term average for January.

February is usually one of the driest months of the year, with a long-term average monthly rainfall of 161mm.

The cooler temperatures in the past week have been due to the effects of a north-east monsoon surge.

"This is a surge of cold air from northern China that results in a steady strengthening of north-easterly winds over the South China Sea," an MSS spokesman explained.

"The monsoon surge has brought windy conditions and cooler temperatures to Singapore in recent days."

The long-term mean daily temperature in December is 23.5 deg C.

Meanwhile, the daily maximum wind speed across the island ranged from 19.6kmh to 23.6kmh.

"This was stronger than the average daily maximum wind speed of 18.3kmh for (last) month," MSS said.

Some Singaporeans have been feeling the chill amid the cooler temperatures.

"Sometimes the wind is so cold, I will open the windows (with) only a small gap and still use a blanket," said civil servant Choy Tze Wei, 25, who lives in a 14th-floor four-room flat in Potong Pasir.

MSS said windy conditions are expected to ease over the next few days, with the weakening of the monsoon surge.

Ms Choy added: "That's a pity, I was just beginning to get used to it."