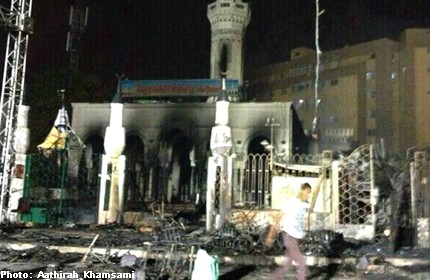 Mess: Singaporean student Aathirah Khamsani took this photo of the aftermath of a riot in Cairo, which has been hit by clashes between security forces and protesters.

Taking pictures may be the norm for many people living abroad.

Not for Mr Muhammad Ricky Yunos, who is living in Egypt amid the bloody clashes between security forces and protesters demanding the reinstatement of ousted president Mohamed Mursi.

"We dare not take photos of demonstrations because the locals told me that we could be mistaken for supporters of Mursi who are trying to document any form of fighting that might break out," said the 21-year-old in an e-mail interview with The New Paper.

For the last year, he has been living at 6th of October City, a satellite town 32km outside the Egyptian capital of Cairo.

"I was supposed to return to Singapore today, but my flight was postponed because of the fighting," said Mr Ricky, who is taking private lessons in the Arabic language.

Despite the media reports on the death and destruction, he insists that life there "is not really bad at all".

"A dusk-till-dawn curfew was imposed on Wednesday so everyone must be indoors or home by 7pm," added Mr Ricky.

"We buy our daily provisions before the curfew starts. I'm lucky, I have not seen any fighting near where I live, but I do worry about my other Singaporean friends who live in Cairo, where most of the violence has been reported."

One such friend is Miss Aathirah Khamsani, a 24-year-old final year Islamic studies undergraduate at Al-Azhar University in Nasr City, about an hour's drive from downtown Cairo.

She told TNP over the phone that none of the Singaporeans she knows living there have been affected by the clashes, which have drawn international condemnation.

According to Miss Aathirah, the area where the Singaporean students are staying has been spared the unrest that has rocked other parts of the capital.

However, getting provisions has been a problem because people have been stocking up on food and other essentials. But both Internet and telephone networks remain accessible and this allows them to keep in touch with family members in Singapore.

"We are on school holidays now so we stay home where it is safe. But we don't know how bad the situation will be and how long the clashes will continue and that's what worries most of us," said Miss Aathirah, who is due to graduate in October.

Safety aside, she said some of her Singaporean schoolmates were worried that they may not be able to complete their studies at the university.

Singapore's Ministry of Foreign Affairs (MFA) said on Wednesday that there have no reports of Singaporeans affected by the Egyptian authorities' crackdown of demonstrators in Cairo so far.

The ministry added that it is working closely with the Islamic Religious Council of Singapore to render assistance to Singaporean students affected by the ongoing unrest, including relocating them temporarily from the affected areas.

The MFA has also advised Singaporeans in Egypt who have yet to register with the ministry to do so at its website at eregister.mfa.gov.sg